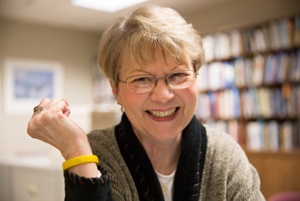 October 6, 2016 - EAA will lose a longtime dedicated staff member this Friday as librarian Sue Lurvey retires. Lurvey didn’t come from an aviation family but was introduced to EAA at a young age by her mother’s cousins, who stayed with them while attending convention. As an adult, she visited convention with her son but didn’t get involved until a professor in the library science program at UW Oshkosh posted a job opening at EAA.

Lurvey joined the EAA staff part time in 1985 when she was hired on by library director Dennis Parks. Parks was a professor at Purdue who helped set up the library at EAA’s new headquarters in Oshkosh and eventually returned to his post there, leaving Lurvey to take over. On her first day flying solo, Lurvey got a somewhat haphazard introduction to the Poberezny family.

“I got a phone call from Paul [Poberezny’s] secretary and she said Paul would like you to bring up such and such an issue of Sport Aviation. And I went ‘Ok!’” Lurvey said with a laugh. “I found the magazine and took it upstairs, she showed me into his office, there was another man sitting there at the time and he didn’t say anything. I gave Paul the magazine and he introduced himself and I introduced myself and we exchanged pleasantries. … A little later on that afternoon that very man who was sitting in Paul’s office came down and said ‘Hi, I’m Paul’s son Tom.’ And that was my introduction to the Poberezny family.”

EAA’s library receives calls, emails, and letters from people all over the world asking for information on all kinds of airplanes. But Lurvey said a lot of what she’s done is archiving and filing drawings, photographs, and slides that were used in EAA’s various publications, which is what she said she’ll miss the most.

“Finding homes for all these wayward photographs that have been stored here, it’s just a Sherlock Homes kind of thing and I’ve learned to enjoy it,” she said.

Lurvey said she already has plans on how to spend her retirement, using the same set of skills she employed for EAA. Lurvey will be helping archive architectural plans and family letters at the Paine Art Center, a historic estate and art museum in Oshkosh.

As Sue trades “aircraft and airfoils for artwork and architecture,” we at EAA want to thank her for her hard work and dedication over the last 31 years. Best of luck to you, Sue!