November 12, 2015 - Last Thursday evening, EAA recognized contributions made to the world of flight by five aviators as they were inducted into the EAA Sport Aviation Halls of Fame during an induction banquet at the EAA Aviation Center in Oshkosh, Wisconsin.

The five aviators represent the spectrum of aviation within the EAA community and have achieved notable successes within their particular realm of flight. They include: 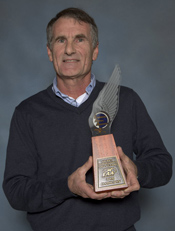 Tom Hamilton expanded the world of homebuilding when he, along with Ted Setzer, introduced the Glasair and molded composite to the field in 1980 at EAA AirVenture Oshkosh.

He was first a water skiing champion and dentistry student before learning to hang glide and, later, fly. After switching his major to aero engineering, Tom began designing his first aircraft while in school, building out of his dad’s garage.

Tom later sold Glasair Aviation to his employees, but rejoined later with Ted and others to design the GlaStar. He also founded Aerocet, which is now the world leader in composite float production. 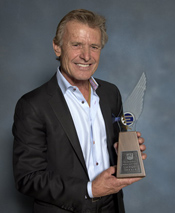 Sean D. Tucker, a well-known name in aviation, has flown more than 1,200 performances at more than 475 air shows since he began his flying career in the mid-1970s. With practicing his air show routine three times every day, Sean’s discipline and commitment to aerobatics are apparent.

He also helps spread the spirit of aviation through the Tutima Academy of Aviation Safety and his nonprofit Every Kid Can Fly program for at-risk youth. Sean was named one of the Living Legends of Flight by the Smithsonian National Air and Space Museum in 2003 and has served as EAA’s Young Eagles chairman since 2013. 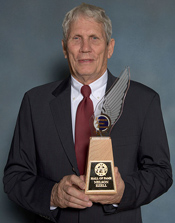 Nelson Ezell’s interest in hot rods as a young man eventually led him to aviation and restoring Warbirds.  He is well known in the Warbird community as one of the best in the business.  From his facilities at the Stephens County Airport in Texas, he and his team have saved some unique aircraft that otherwise may have ended up in the scrap heap. They have restored aircraft including a Brewster Corsair, Lockheed P-38 Lightning, many P-51 Mustangs, and multiple F8F Bearcats.  Nelson and his wife, Dude, have four children, and their two boys are actively involved in the family business, Ezell Aviation. 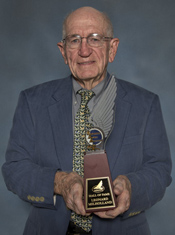 Leonard Milholland served in the Army Air Corps as a crew chief on BT-13s and B-24s in the Panama Canal Zone during World War II. Following the war, he didn’t fly again until 1970, when he and his first wife, LaVerne, began flying a Cessna 182. They built a hangar home in Texas, which quickly became a gathering place for EAA Chapter 774 members.  In 1998 he introduced his Legal Eagle ultralight design. He’s often said his life changed the day the picture of his Legal Eagle appeared in Sport Aviation magazine and when he married his second wife, Donna, following LaVerne’s passing. Over the years, Leonard has added the Double Eagle, Legal Eagle XL, and the Cabin Eagle to his list of designs. 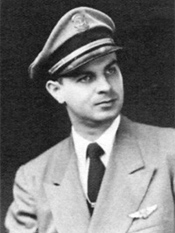 Dale “Gus” Gustafson, 40-year member of the Vintage Aircraft Association board of directors, obtained a rare copilot job with (Roscoe) Turner Airlines in 1950, flying surplus World War II C-47s and DC-3s. He served as Vintage chief judge for 40 years, in addition to serving 10 years as president of Indianapolis EAA Chapter 1311.He owned, flew, and restored various airplanes, including a Stearman, Piper J-4 Cub Coupe, and Aeronca 11AC Chief. Gus passed away June 26, 2014. During the last weeks of his life, just like Paul, Gus was busy making plans to attend EAA AirVenture 2014 and tour the Vintage area.

The EAA Sport Aviation Halls of Fame were established to honor the outstanding achievements of men and women in aviation who share the spirit of EAA and its community. Those inducted into the hall of fame are selected by their peers for the myriad of contributions made to their respective areas of aviation.