Seaplane Base Gets New Chairman 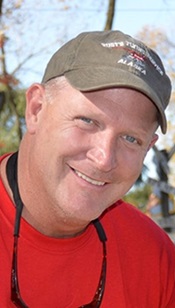 November 21, 2017 - The new chairman of the EAA Seaplane Base is a familiar face for anyone who’s been a regular visitor to the base at EAA AirVenture Oshkosh over the years.

An airline pilot, Mark stepped away as chairman after AirVenture 2003 due to a busy work and family schedule but never lost his passion for the Seaplane Base.

“People really, truly have a passion for the place,” he said. “That’s why I came back. I didn’t really ever have intentions of doing so, but based on my background it was only natural that I wanted to come back and make sure that the future was secured for all those that enjoy that special place on the planet.”

While Mark is obviously drawn to the Seaplane Base by his love of seaplanes and aviation in general, his connection is much deeper than that.

“It’s like an extended family in that truly we know each other by name and who our children are and what they’re doing for upwards of 500 people,” Mark explained. “That’s really special. It’s always truly about the people. The common denominator that brings us together … is obviously aviation. Beyond the people and aviation connection, it’s the place on the planet. It’s really very natural, just the geography of the place and how it’s situated with the lagoon protecting upwards of 100 seaplanes at one time — protecting that from the rough water of Lake Winnebago. It’s really pretty unique and special. I would say it’s kind of that combo of people, the aviation connection and how picturesque and unique what we call the best-kept secret of AirVenture is. That’s what really runs through my blood, through my veins.”

As chairman, Mark doesn’t have any grandiose plans for the Seaplane Base but hopes to improve it where he can and keep it running efficiently, while maintaining the family feel that’s made it into the special place it is for him and many other EAA members.

“When I make plans to do anything (at the Seaplane Base), I’m planning well beyond my tenure. I’m planning for forever, if you will,” he said. “I want to keep my core group of volunteers coming back, which they have all indicated that they are. I want to make it so that the experience for the membership surpasses anyone’s expectation, especially for someone who’s never been there before. I want their experience to be like ‘That was the most incredible experience I’ve ever had.’ My goal is to have an efficient operation that provides that service to our members. What comes with that is a camaraderie or a feeling of being welcomed and being a part of that family that I’ve already described. If a newcomer comes in, I want them to feel like they’re not a newcomer.”