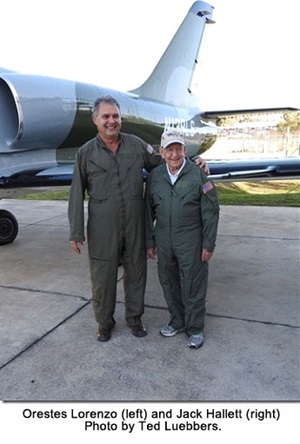 December 22, 2015 - Jack Hallett had no idea that getting his hair cut would lead him back into the air to do what he loves more than anything: flying aerobatics. Sharing his World War II stories of flying a P-38 and P-47 in the European theater led Hallett’s barber to introduce him to me, a private pilot.

After meeting Hallett, I took him for a ride in my Mooney. He flew the Mooney well; he did some maneuvers, but told me he would like to fly aerobatics again. I introduced him to Steve Wolf and Kathy Hirtz, owners of WingOver Aerobatics based at the Leesburg International Airport.  He flew first with Hirtz in their Zlin, a fully aerobatic trainer, doing many maneuvers, including formation flying when Wolf joined them in the air and Hallett flew off of the wing of Wolf’s S-2B Pitts.

Afterwards, Hallett set a goal to fly the Pitts with Wolf, on November 17 for his 95th birthday. The Pitts, a high-performance aerobatic show plane, was definitely a step up. Wolf told us he flew beautifully. Hallett had a fantastic time and thought he had hit the pinnacle of his aerobatic opportunities at his age. Not so fast!

Orestes Lorenzo happened to be at the airport that day when Jack returned from his birthday flight. Lorenzo owns an L-39 Albatros. This Czech jet fighter trainer is the real deal. It is fast, powerful, fully aerobatic, and it can produce up to +8/-4g’s and fly over 400 kts. Lorenzo asked Hallett if he would like to fly the L-39.

On December 13 they met at the Leesburg Airport and did just that. Lorenzo had a green flight suit that fit Hallett, the helmet, parachute, and all the gear to fly aerobatics. They spent 30 minutes or so going over their flight plan and all of the instruments and switches in the cockpit.

Hallett was really surprised and delighted he was going to fly the front seat! Climbing in and sitting down in the cockpit of this airplane is a little overwhelming. In a very tight area, the L-39 has a ton of buttons and switches that Hallett had to become familiar with to fly the front seat. It took a few minutes and he was ready.

They fired up the jet and taxied away. We watched them smoothly take off and awaited their return. It was about 30 minutes later when they came back doing a touch and go on runway 13.  They came around, landed, and taxied back to the hangar.

As the canopy lifted, we could see Hallett grinning from ear to ear. We asked him how it went. “Amazing,” he said. “The plane flew like a dream. It rolled and looped beautifully!” Lorenzo said Hallett did the majority of the flying, including the takeoff and last landing. He said it was a privilege with a World War II pilot and noted that for someone who had never flown an Albatros before, Hallett’s flying skills were really good.

Introducing Hallett to some of these amazing pilots and watching how it has impacted their lives for the better has been a wonderful experience. Videos of Hallett’s flights in the Pitts and the L-39 are on available on YouTube. I would encourage you to watch them; they are amazing and it will help you to rethink about how you age, and what can be done in your 90s!