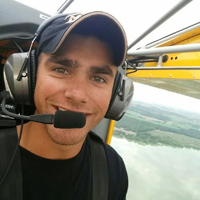 January 2016 - David Leiting Jr., from Kenosha, Wisconsin, attended his first EAA AirVenture Oshkosh at the age of 6 months. His involvement with EAA stems from his parents, who attended their first AirVenture with pilot friends. They were hooked after their first trip to Oshkosh.

Since then, David has attended AirVenture every year, an impressive total of 22. He started volunteering at AirVenture with his father at a young age. Starting in 2013, he decided to make his volunteering more official and found a home within the A Team. Since then, he volunteers regularly with the North 40 Flightline Ops, AirCraft Greeters, and Main Gate North Admissions.

During AirVenture 2015, EAA rolled out a new Collegiate Volunteer Program to help college-age students experience AirVenture. David was essential to the program, as he took it upon himself to welcome the Collegiate Volunteers and arranged an area for them to camp and to get to know each other. When asked what he most enjoyed about the program, he said it was being able to meet people his age and being able to guide these new AirVenture attendees.

David continues his engagement year-round with EAA through involvement with chapters. His memberships include Chapter 551 in Saint Cloud, Minnesota, and Chapter 1342 in Grand Forks, North Dakota. He joined the five-member Chapter 1342 in 2012 and has since watched it grow to 50 members. This unique chapter is mainly composed of University of North Dakota students and a few faculty members.

In 2013 David took on the role of Young Eagles Coordinator, and in 2014 he was named chapter president. As a member of Chapter 1342, he enjoys introducing students to EAA and the world of recreational flying. He also has introduced the joy of flight to 20 youths as a Young Eagles pilot.

David attends the University of North Dakota and plans to graduate in 2016 with a degree in airport management. He has previously held internships at the Saint Cloud Airport, Avflight Grand Forks, and most recently finished an internship at EAA, working in the Chapter Office.

When asked what advice he would give to young pilots, he said, “If you really want to learn to fly, don’t let anything stop you.”

David is looking forward to his 23rd consecutive EAA AirVenture Oshkosh this summer.