The Rest of the Story: Fire-Breathing Super RV-8s

Story and Photos by Brett Hahn

April 2016 - We are motor heads by nature. If you have ever driven a rat-motored Corvette so hard that you were barely able to reach the gearshift, or twisted the throttle wide open on a big ol’ dirt bike and barely held on for your life, then you are one of us. You are addicted to speed, torque, and horsepower. More is always better. The sublime rush of raw thrust pins you back against the seat. Adrenaline rushes through your veins. If you are obsessed with the ultimate in performance, you will lust after a Super RV-8.

Master RV builder John Marshall built such a beast. Based in Shelbyville, Indiana, just outside of Indianapolis, John has been building and flying aircraft for most of his adult years and has more than 12 completions under his belt. One Sunday morning, I met John and co-builder Larry Boggs for a flight. The weather was clear and uncommonly cool for an Indiana summer day. After a thorough preflight, John jumped into his green monster; Larry and I belted up in the red one.

The cockpit is spacious with plenty of shoulder, hip and leg room. With the sliding canopy open, we taxied out together. Visibility was quite good for a taildragger. After a careful run-up, we closed the canopy and taxied out together. I was surprised at how much headroom I had above my headset. Even though I am over 6 feet 1 inch, there was easily 4 inches of clearance.

On the runway, John took the lead and punched his throttle to the stop. The prop spun up to 2700 rpm and he shot forward. We pulled the trigger and formed up right behind him. As we started accelerating, I started counting: one Mississippi, two Mississippi, stick forward, tail up. Three Mississippi, four Mississippi, stick back and the Super RV-8s leaped off the runway in unison. We used less than 400 feet of runway and were now rocketing up at 3,000+ feet per minute in lock-step with John. The Super RV-8 was rock solid as we climbed out at 140 mph.

Barely a minute later, we leveled out at 3,500 feet AGL and the Super RV-8s accelerated again. With John leading the way and Larry on his wing, the airspeed indicator wound up to 220 mph. This is his normal cruise speed; he sets up for 23 squared and burns about 12.5 gph. Larry dropped back, slowing his airplane to 200 mph by reducing the power to 2200 rpm and 19 inches of manifold pressure. This allowed four other stock RVs to close in and establish a loose formation with us as we flew across the Indiana countryside. At 200 mph, he averages less than 10 gallons of fuel burn per hour. The Super RV-8 has a range of about 800 miles at this lower setting.

I pulled my headset off for a moment to assess the noise and vibration levels. I was amazed at how smooth and quiet this airplane was with the big six-cylinder engine turning so slowly. My visibility was outstanding. I now know what the visibility must have been like from the top gunner’s nest in a B-17. I had virtually a 360-degree view. My downward vision, even though partially blocked by the stubby, low wing, was superb as well.

John used the standard RV-8 kit, while Larry started out with RV-8 fast-build kit. The stock motor mount is replaced by a special motor mount John designed and fabricated for the carbureted Lycoming O-540 engine. The new motor mount is beefy and uses 1-inch 4130 Chrome-Moly tubing throughout the structure. The new motor mount also sets the O-540 aft 4  inches. The big six-cylinder engine is actually 8 inches longer than its little four-cylinder brother. With the 4-inch setback of the motor mount, John finishes the job by custom-fabricating a beautiful 4-inch cowl extension. To complete the installation, John uses a specially modified 78-inch Hartzell constant-speed prop. This prop is perfectly matched to the 260-hp engine and is greatly responsible for the stunning climb performance.

Center of gravity (CG) is always an issue with tandem-configured aircraft, and John has done his homework here, too. In addition to precise engine placement, he relocates the battery back a full two bays in the tail cone. This modification produces a rock-solid CG. In fact, the only time the Super RV-8 is out of CG is with a solo pilot weighing less than 170 pounds and with fewer than five gallons of fuel on board. In this condition, the CG is forward. Also, when flying solo, John and Larry are careful not to load more than five pounds into the nose baggage compartment located just in front of the canopy. They simply put their bags in the rear seat.

Larry spent about 26 months completing his Super RV-8 and estimates that he has invested about 2,000 hours in it. He first flew in spring 2003 and performed all the test flights himself. A pilot since 1981, he has about 650 hours’ total time in Piper Warriors, Archers, and Arrows, and more than 250 hours in a Champ taildragger. He prepared for his first flight by reading articles, discussing the flight test procedures with other pilots, and, finally, getting some stick time in other RVs. After several taxi tests, he positioned himself at the end of the runway and just took off. Larry felt very comfortable as his new Super RV-8 flew flawlessly the first time out.

Super RV-8 landings are easy, too. Larry comes in on final approach with full flaps, with the airspeed indicating 80 to 85 mph. He rounds out, bleeding the speed down to 70 mph, and the Super RV-8 settles into a gentle two-wheel landing, which he prefers. Stall comes at just under 60 mph. He can hold the tail off until the speed drops below 40 mph. Larry has logged more than 220 hours on his Super RV-8 and could not be more pleased with its comfort, performance and reliability. Although he went all-out on the paint, interior, and panel, he estimates he spent less than $70,000 on the whole project.

In the mid-1990s, the side-by-side RV-6 had eclipsed the tandem RV-4 to become Van’s Aircraft’s most popular kit. But due to the superior aerodynamics of tandem-seat airplanes, designer Richard VanGrunsven (Van) thought that there might be a great cross-country airplane lurking in the shadows. Not lost on Van was the fact that many pilots love the fighter-like feel of this configuration, sliding canopy and all. There also was a marketing element to putting an RV-4 on steroids: size and comfort. As many a kit manufacturer has discovered through numerous lost sales, American pilots growing up on good ole’ milk, beef, and Wisconsin cheese just don’t fit. Many pilots feel awkward folding themselves into a pretzel while trying to squeeze into an experimental airplane’s cockpit. Van decided to tap into the over-6-foot-tall pilot market by offering a new airplane with a bodacious amount of room, and the RV-8 was born.

The RV-8 concept airplane debuted at Oshkosh in 1995, and pilot response was overwhelming. However, in typical fashion, Van held off taking orders that year. Instead he and his team put their heads together and refined the airplane until it met their own high standards. During this time, Van fine-tuned his manufacturing operation, acquiring computer-controlled CNC machinery to precisely manufacture the kit components. This resulted in cost reductions for Van’s Aircraft that trickled down to the customer. The new kits fit together better than ever and they were much quicker to build. In spring 1998, the first RV-8 kits were sold. By the end of 1999, more than 1,100 kits had been delivered. As of April 2016, 1,346 customer-built RV-8s are registered and flying. 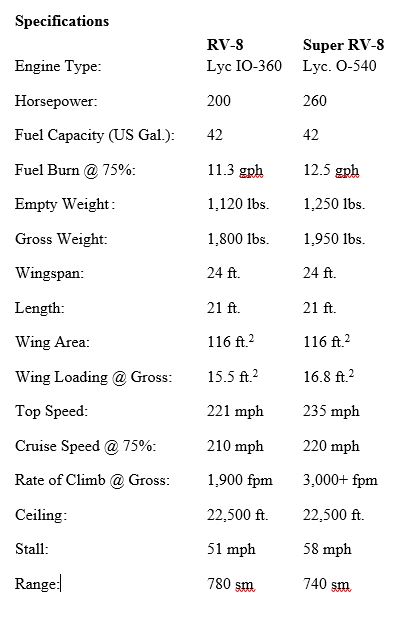