Paying It Forward, the Breezy Way

March 2017 - What if you had the power to make someone incredibly and uniquely happy with just one act? Perhaps you would help them achieve a dream, overcome a fear, or ignite a spark that leads to a lifetime pursuit. How good would that make you feel? Pretty darn good, I’d say, and any EAA pilot or volunteer can tell you exactly the same thing. It’s all in the smiles and excitement that the wonder of flight brings, and the realization that there are some seriously cool things to do down at the local airport.

Once you experience the joy that flight brings, you can never forget it. And when a Young Eagle comes back years later as an aviator because of you — well, you really never forget that, either. Then, when those former Young Eagles fly kids themselves, you just feel old!

Now, imagine if you will that you have delivered that wonder of flight more than 12,500 times. Yes, that’s twelve thousand five hundred — over a span of 38 years (25 of which were on-site at EAA AirVenture) — in a contraption that could only have been dreamed up by someone who clearly had no idea of what a self-respecting airplane should look like. If you are one of those lucky passengers, you rode with a character as colorful as the plane itself — a man known primarily for his pink shirt, easy grin, and for kissing the ground in humble thanks after every flight. That man would be Mr. Arnold A. Zimmerman. 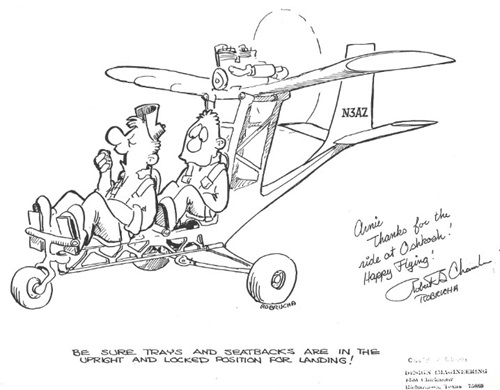 Arnie has had, and continues to have, an astonishing life. If you were to ask him about it he’d typically understate himself and tell you, “I’ve had a good run, and I’ve been blessed,” as if that could truly describe what he has accomplished.

Arnie is the recipient of multiple awards, including the FAA Wright Brothers Master Pilot Award in 2005 (zero incidents over 50 years of flying). He was inducted into the Illinois Aviation Hall of Fame in 2010 for outstanding contributions to the advancement of aviation in Illinois and received the Phillips 66 Leadership Award at AirVenture 2000 along with Brig. Gen. Chuck Yeager. One of the things he is most humbled by is the flagstone brick placed in his honor by fellow EAAers in the walkway beneath the entrance to EAA AirVenture’s Brown Arch at Oshkosh. The opening line on the stone says it all:

“Arnie Zimmerman, You have touched the lives of thousands, young and old, by giving them the simple but precious gift of an airplane ride.”

Arnie and his often peculiar buddies who compose the core of EAA Chapter 461 have been building planes and flying since Doris Day was No. 1 at the box office. Of all the planes members John Friling, Rich Tichy, Doc Steichen, Ron Cothern, Harley Holt, Colin Koebel, and a few others have built, the Breezys arguably created more joy than any of them. When one considers that the list contains aircraft ranging from the Rutan Long-EZ and Defiant to the Pietenpol and Volksplane (the latter being built and flown by Doc “I love flying in ground effect” Art Glaser), that’s some serious praise. 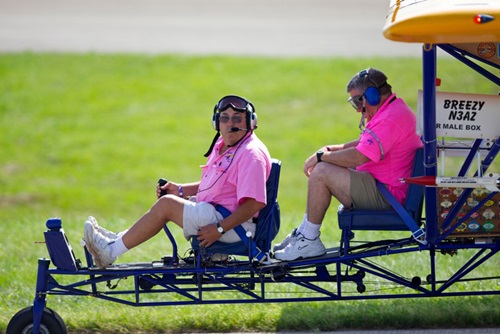 The Breezy was designed by pilots as a purist’s airplane: to ride out in the open air in the most thrilling way possible — and adding an I-can’t-believe-I-just-went-up-in-that-thing flavor to an already amazing experience. It was created back in 1964 when EAAers Carl Unger, Charley Roloff, and Bob Liposky built the prototype as a way to recapture the thrilling basics of “what’s real” in flight — and in doing so created a masterpiece that invited great flying adventures and a following even they could not foresee. The fact that they had no plans in the beginning, designing and building the thing as they went along, just adds depth to the story — although they did eventually end up reverse-engineering the plane and selling more than 1,000 copies of the plans due to high demand.

Arnie built two Breezys. He sold the first one in 1999 to Mark Trimble of Branson, Missouri, who decided, quite ambitiously, that it would be a good idea to turn it into a seaplane complete with spoked steering wheel in lieu of a stick. This amazing creation, called the Sea Breezy, was flown to AirVenture in Oshkosh from Branson in 2014 for the 50th anniversary of the Breezy.

Rob Unger (Breezy co-designer and Carl’s son) and Arnie began searching for a pilot among their group who possessed a seaplane rating and who had enough experience to fly the plane up for the celebration. Finally, after a Chapter 461 meeting one night, Capt. Dave Kennerly made the critical error of mentioning that he had his seaplane rating. He had just inadvertently volunteered to fly the seaplane up from Branson to Oshkosh and back!

Dave subsequently drove to Mark’s home in Branson and flew the Sea Breezy to AirVenture Oshkosh 2014 and back. Following along close below him on the roads, Dave’s 19-year-old son Alex drove the family pickup as ground support with spare parts and supplies. 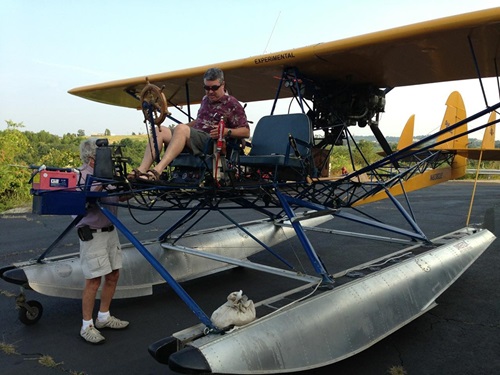 Up close with the Sea Breezy. The gentleman on the throne is Capt. Dave Kennerly — the pilot who flew the aircraft from Branson, Missouri, to AirVenture 2014 and back. Image Copyright Richard Tichy, used with permission.

The journey took three days each way, required 14 stops on the way up and 12 on the way back, and cruised right around 60 knots. Dave reports that anything faster was like sitting in a hurricane!

Arnie’s second Breezy, N3AZ, has flown passengers from every walk of life and many countries — especially during its sojourns to and during AirVenture. Arnie fondly remembers taking Anatoly Pavlovich Artsebarsky for a ride soon after the Russian cosmonaut’s fortuitous return from the Mir space station. Anatoly and a fellow cosmonaut were nearly stuck in space during the 1991 Soviet Coup attempt. Anatoly, who had five months in space and 33 hours spacewalking under his belt, still loved the Breezy! 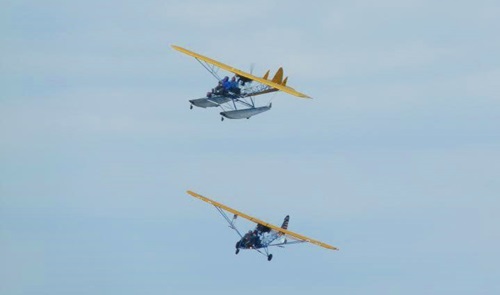 The Sea Breezy and N3AZ enjoy an afternoon flying formation over AirVenture.

Anatoly was not the only Breezy passenger who had left the Earth’s atmosphere. U.S. Air Force Col. Ron Grabe, who flew four space shuttle missions, loved the Breezy as well — and later sent Arnie a wonderful signed photo of a shuttle launch, sharing that he wished he could return the favor of a ride.

Arnie guesstimates that about 1 percent of Young Eagles go on to careers in aviation, which is pretty amazing given that a significant percentage of those actually had a spark ignited by the initial flight and might never have pursued aviation were it not for the Young Eagles program. So, out of the approximately 125 aviators spun off by Arnie from Breezy rides, I’ll point out one young man who was not only viscerally impacted by Arnie’s Breezy and mentoring, but who went on to achieve great things in aviation.

On August 26, 2000, young Joe Kenahan of North Riverside, Illinois, received a ride from Arnie in his Breezy. Joe and Arnie both remember that day as if it were yesterday.

For his birthday the following year, Joe’s mom, Marty Kenahan, asked Arnie if he would give Joe and his five buddies a ride, which Arnie proceeded to do with zero hesitation. Joe’s love of aviation grew from there, and he would frequently have his mom drop him off to help work on re-covering and stitching the wings for N3AZ. EAA Chapter 461 subsequently provided a scholarship for Joe to attend the EAA AirVenture Academy. Also, in June 2007, Joe graduated from high school in the top 10 of his class. At this point he was only months away from getting his private pilot certificate and went on to accomplish that as well.

In the succeeding years, Arnie took Joe under his wing — even so far as to write a recommendation to Stanford University, from which Joe later graduated with a bachelor’s degree in physics and a master’s degree in aerospace, aeronauticics, and astronautical engineering. Today, Joe is a joint holder of aerospace patents and, following a series of high profile internships (one at Scaled Composites), now works at SpaceX in propulsion engineering.

Joe is a poster child for the Young Eagles program, but perhaps more importantly, his life is a testament to the undeniable value that mentoring young people and helping them define and achieve their dreams can bring.

EAA Young Eagles was originally introduced in 1992. By 2016, Young Eagles volunteer pilots had flown more than 2 million youngsters from more than 90 countries. Ground-based Young Eagles volunteers as well as pilots like Arnie not only have helped preserve the dream of flight for all of us, but also have advanced the course of aviation through continued renewal of interest among our young people through mentoring those individuals who want nothing more than to follow in their footsteps.

If you have any Breezy stories, or great Young Eagles stories that you’d like to share with us, please feel free to send them to wbrazinski@gmail.com or ring me at 630-675-9103. I’d be delighted to hear from you — and who knows, one day we may compile them all a single epic volume for all to cherish.