Lyncrest Does It Again!

August 14, 2017 - Several Canadian EAA chapters have a tradition of camping together at EAA AirVenture Oshkosh. Your editor was welcomed into the fold of one of those groups this year. Tom and Joyce Stoyka leave Winnipeg early in the week before the show with a trailer full of tables, tarps, barbecues, and even a chest freezer. They have been doing this for 20 years and clearly love it. Members pitch in willingly, and meals magically appear without anyone seeming to ask. Many of the members volunteer at several jobs including the museum, helping set up for the multiple banquets, and goodness knows what else. 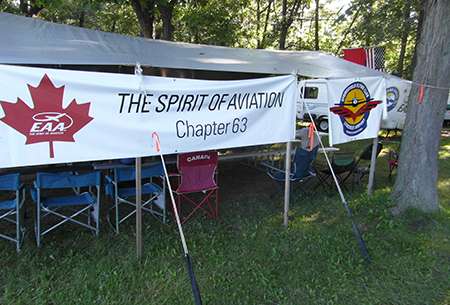 EAA Chapter 63 in Lyncrest, which is near Winnipeg, is quite unique in how well-integrated their activities are regarding EAA, Canadian Owners and Pilots Association, the Recreational Aircraft Association and Springfield Flying Club. As far as they’re concerned, they’re all “just pilots.”

On Tuesday evening during AirVenture, they have a pasta night, and it was delicious with heaping helpings of spaghetti, pasta sauce, garlic bread, and salad. Part of their tradition is to invite friends who are not camping with them to join them for the evening. A great night was had by all. 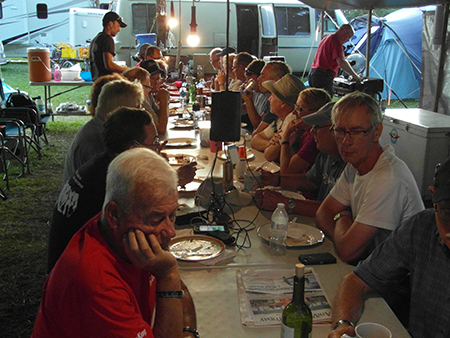 None of this can happen without serious planning and some huge effort by Tom and Joyce. The members expressed their appreciation loudly once the meal was polished off and the dishes were done. Everything has a place, which is really convenient since I found my lost tea mug where the mugs are kept. Joyce told me a story about how they had an internationally experienced nurse join them one year, who suggested that hand-washing and dishwashing should be physically separated at opposite ends of the camp for hygiene reasons. It’s been that way ever since. Little tweaks make the whole operation run smoother every year. They have an extra-high antenna to pick up the Wi-Fi, a generator to provide light at night, and an enormous tarp to cover the whole seating area.

Thanks to Tom and Joyce Stoyka, President Mark Odegard, and all of my new friends at Chapter 63. Maybe you’ll have me back next year.