August 2016 - Okay, first things first. After several aborted attempts to make the trip to EAA AirVenture Oshkosh in recent years, your editor landed his RV-9A on the green dot on Runway 27 after an uneventful trip. The dream of flying my own homebuilt aircraft, joining the traffic at Ripon, following the railroad tracks from Fisk, and waggling my wings when asked, were all accomplished with only one minor problem. Having planned to land on 36L, we were informed at the last moment that 36 had been shut down. I believe we were the first aircraft to be redirected to 27. This involved a change in altitude, and a sudden “Oh dear, I don’t see the railroad tracks, and which end is 27 anyway?” We settled down and focused on the landing. My copilot and good friend Gaétan Gagnon, on hearing “land on the green dot,” said, “So aim for the orange dot,” which resulted in squeaking the wheels down exactly on the green dot. After we taxied out toward homebuilt camping, we learned that a flock of Cessnas had just landed on 36, and we had to wait about half an hour while they all taxied by. Taxiing to our spot, showing the homebuilt camping card allowed us to unload just before the rain came. We had made a tight turn at Ripon to avoid towering convective activity just south of Ripon, and it came to meet us in time to cool us down while we installed the first few tent pegs and got the tents at least waterproof. We were home. Registering your homebuilt at the registration desk gets you a patch, an engraved mug, and a list of events specifically for homebuilders who fly in. What a great start to the week.

I think that most Canadians who attended AirVenture this year would agree that it was the best ever for Canadians. Not only were the Snowbirds fabulous, but the daily drenching of Runway 36 by the Martin Mars water bomber was truly impressive. One unexpected but impressive part of the Snowbirds flight demonstration on Thursday was when one of the pilots had to land because of a bad oil-pressure reading. During the show he landed, switched aircraft, and rejoined the team for the rest of the show in aircraft No. 10, which was kept at the ready in case of such an event.

Your Canada Tent was packed on many days with several excellent presentations on the agenda. There was a lot of interest in our seminars on crossing the border, with 80-100 Americans keen to learn how to pay Canada a visit. 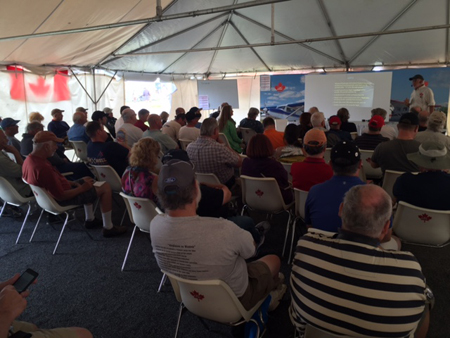 A special high point was our ice cream social to meet and greet the Snowbirds. The chairs were cleared, the freezer was loaded with ice cream and Popsicles, and right on cue at 4 p.m. Thursday, in walked all the Snowbird pilots and their public affairs officer in red flight suits. 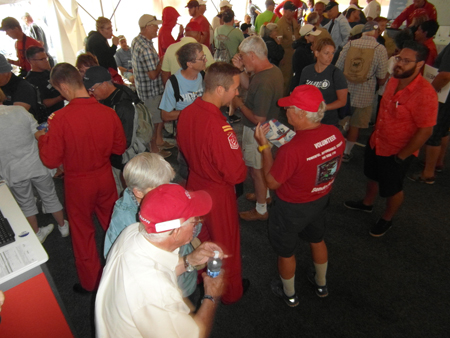 They are a fine-looking group of people with great communications skills and lots of patience for photos and signing autographs. I asked two of them how old they were when the Snowbirds last visited Oshkosh. One said he was 1-year-old and the other was just 2 months. 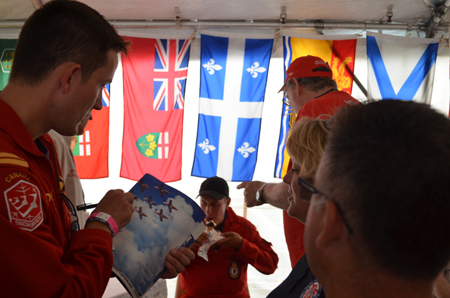 I was particularly impressed with the number of Canadian identification marks visible in homebuilt camping. Just in my parking row alone there were several Canadian-registered RVs.

The second annual Canadian EAA members breakfast at Oshkosh was excellent, thanks to sponsors Global Aerospace and their C-Plan product offered and supported by Nacora Insurance Brokers. More than 200 Canadian members were served a copious hot breakfast with good coffee and great fraternity. At around 8 a.m. the agenda started. Fred and Marilyn Bruinsma of Goderich accepted a plaque on behalf of Keith “Hoppy” Hopkinson and Gus Chisholm, friends and founders of the homebuilt aircraft movement in Canada. 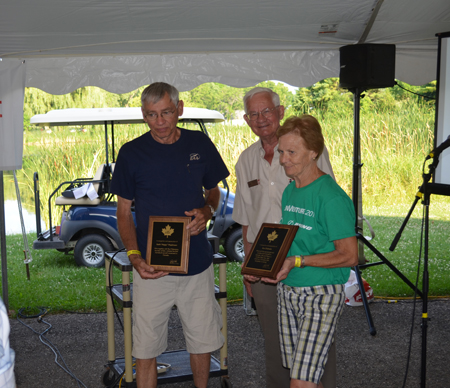 Fred and Marilyn Bruinsma receiving plaques on behalf of Hoppy and Gus.

Our third honouree, Jim Armstrong, was able to receive his award in person, which read, “To Jim Armstrong, who together with family, exemplifies the EAA spirit of volunteerism, coming to and volunteering at the EAA fly-ins since the Rockford days.” Congratulations Jim. We hope to see you and Leona at many more Oshkosh fly-ins to come. 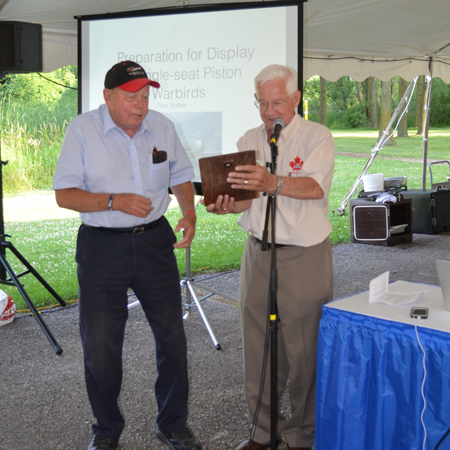 You can read about Jim’s story in the August 2012 issue of Bits and Pieces. Incidentally our e-newsletter was named after Gus Chisholm’s homebuilt Baby Ace, Bits and Pieces.

I’d like to make a special comment to your Canadian Council members and others who helped make the Canada Tent and the surrounding showplanes a success, especially Jack and Deb Dueck, Cory Puuri, Jeff Seaborn, and Serge Desilets. Thanks to all of you for all your time and effort, which began way before the show. From the many hours spent designing the tent layout to preparing and presenting forums, the ice cream social, and Canadian breakfast, you all did a tremendous job, and I’d like to thank you all sincerely on behalf of our readers.