August 2018 - If you prefer not to be one of those people losing their hearing on the primary flightline during the EAA AirVenture Oshkosh daily air show, you might like to watch the much less frenetic and more pastoral pastime of powered paragliding, also known as paramotoring. The pilot has a parachute wing attached to a harness. An engine is strapped to the pilot’s back, and the harness has a type of seating arrangement. After starting the engine, the pilot faces into the wind, gets the wing to fly with the help of the breeze and the air current generated by the propeller, and then runs into the wind, taking off very quickly. The run looks quite awkward, but as soon as the pilot lifts off they look very comfortable.

Once in the air, the pilot has directional control and can either fly leisurely circuits or do more advanced stunts like those the Paradigm Aerobatic Team performed during the air shows. 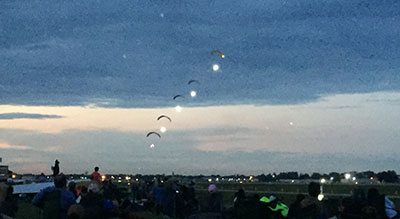 The 40- to 60-pound harness/engine/propeller pack makes it heavy work running to take off. The takeoff is physically challenging, but once in the air, the weight is borne by the parachute wing, and the pilot scoots back into the harness seat to enjoy the flight. For those who would find it difficult to run with 50 or 60 pounds on their back, a three- or four-wheeled cart paraglider is an option. 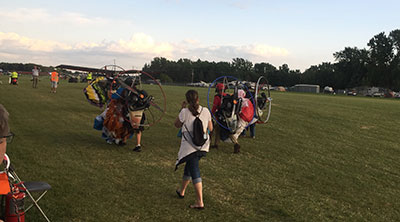 One aficionado, a commercial airline pilot when not indulging in his hobby, took the time to explain to us the control system, which is surprisingly capable. The pilot is able to trim and adjust the wing with several controls attached to the harness just above the shoulders.

Actually, the terminology is a bit vague, but it seems that a paramotor is the equipment whereas powered paragliding is the act of doing it. Nonpowered paragliding seems to be in the same realm as hang gliding, foot launched off a hill or towline. 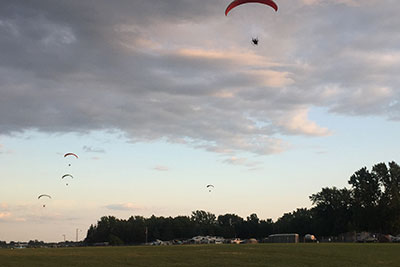 Powered paragliders in the circuit.

Cross-country travel is possible with a powered paraglider if you’re not in a hurry, and the gliding part implies the same quest for thermals as fixed-wing glider and motorglider aircraft. Since takeoffs are facing directly into the wind, a PPG pilot might ignore the runway at an airport completely, and simply take off on a few yards of grass.

To get into the sport will cost you between US$5,000 and US$13,000, and some extra equipment like a noise-cancelling helmet and strong ankle-supporting boots are recommended. If you are interested in becoming involved in this fascinating sport, you might start by finding a local instructor. A major difference between our Canadian regulations and those in the United States is that you still need an ultralight pilot permit to fly a powered paraglider in Canada. Training through a Transport Canada approved instructor is required to obtain a license. You will need at least a category four medical.