Another Great AirVenture Oshkosh—Almost made it this time!

August 2015 - The dream of every builder of a homebuilt aircraft is to fly it to EAA AirVenture Oshkosh, join the Ripon/Fisk/Oshkosh traffic, and land there. Two years ago I loaded the aircraft, only to be turned back halfway because of weather. This year I was determined. We set off as a flight of two, with my RV-9A and my friend Serge Desilets in his Mustang II. The engine was burbling a bit en route and was giving enough cause for concern that on arriving at Ludington for the crossing of Lake Michigan, we decided to overnight at a hotel and investigate in the morning. Naturally, less than 100 percent confidence in one’s motor should be a cause for deciding that even just a 20-minute crossing over open water should be avoided. The sun rose the next morning with very nice conditions for the crossing. The previous day’s line of thunderstorms had passed by both Oshkosh and Michigan. Running up the engine, one magneto was just not right, so we took a test flight to see if it would clear, suspecting a fouled plug. Heading out over the lake with the airport still clearly in gliding distance behind me, it became obvious that discretion was the word of the day.

I landed back at Ludington (incidentally a very nice airport close to town). The airport manager identified a capable local aviation mechanic and gave me his number. We put the aircraft in a hangar for the week. On passing the fuel station, I saw a very friendly gentleman refuelling his Piper Meridian—a beautiful aircraft blessed with a brand-new dual-Garmin G5000 touch-screen panel, destined to be shown at the NexAir booth, 317. It’s the first time I’d paid attention to any of the larger Piper models, but the Meridian is a 260-knot cruise, turboprop, pressurized luxury aircraft. On speaking to the pilot, John Godfrey, and explaining my situation, without hesitation he said, “Well, I can take you.” My day of lemons was rapidly turning into the best lemonade you could imagine. 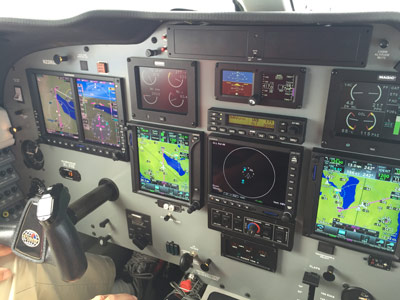 John kindly loaded my baggage while I finalised some details with the airport manager, and off we went. The panel was gorgeous, incredible. It was talking to John’s iPad, and the iPad was talking back. In less than an hour we had crossed Lake Michigan, arrived in Fond du Lac, and were following the routing for turboprops out over Warplane Island and on to final approach for 36R at Oshkosh. He flew almost all the trip with his hands off the controls. Being in the right seat, I had the unexpected luxury of being able to video the landing, which you can see here.

The video shows a small aircraft that was also trying to use 36R and was seen going around as we came to a stop. 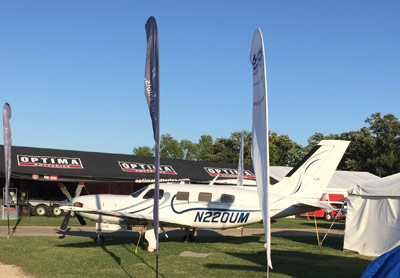 Meridian on display at NexAir

Calling back to Ludington during Monday, the first day of the show, the mechanic told me we should replace both magnetos, so they were ordered and dispatched the same day from Aircraft Spruce. It turns out you can get a better deal if you buy the mags/ignition harness and plugs as one kit, so that’s what we did. By Friday everything was installed and buttoned up, ready for pickup on Sunday. I received confirmation that the engine was running fine, and so it proved on the return journey. We took two days to fly back, with an overnight stop at the grass strip of frequent Bits and Pieces contributor, J. Davis. He and his wife, Jaye, were in Victoria, British Columbia, for the arrival of their first grandchild, but he’d invited us to make use of his guest bedrooms. I’m sure you’ll join me in congratulating both of them.

The last leg brought beautiful weather as we passed Toronto Island, but by the time we got to a stop at Smiths Falls, the controllers began to warn us of bad weather ahead. Making sure we had full fuel in case of a need to do a 180, we took off to our separate destinations—Serge to Trois-Rivières and me to Bromont. Apparently the worst of it had now positioned itself directly in my line between Saint-Jean-sur-Richelieu and Bromont. I was advised that even larger aircraft were detouring around the area completely, but as you probably know, smaller aircraft can manoeuvre between cells that larger aircraft might find it difficult to avoid. I pulled back the throttle and deviated north of the worst weather, and although ominous-looking clouds towered to either side of me, I encountered no turbulence and only a sprinkling of rain. Calling my local airport I received a pilot report (PIREP) from a helicopter pilot announcing clear blue skies above him. If I could only get there!

Well, not to drag out the story, the final approach and landing proved uneventful, even though there was weather all around. Serge landed in Trois-Rivières without too much to deal with. Apparently the storms that were headed his way had decided to deviate enough that he had no problems.

Oshkosh was great, as you will see in other articles this month. It’s too big, of course, to see everything. I spent a full week and never achieved a fraction of what was on my agenda, but each year there is something new to discover, some new trail in the rabbit warren that is Oshkosh to explore.

It was the first year I’ve had the privilege to present a talk at the Canada Tent, and all the talks were well-attended in general. Here is a link to the presentation I gave about crossing the U.S./Canada border, with thanks for the content by Paul Dyck who was unable to attend. 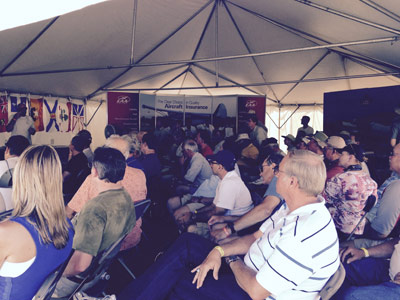 The sincerest of thanks go to Jack Dueck for organising such a superb slate of presentations. Each presenter spends days preparing his or her topic, and the work goes on all year to support the interests of Canadian members.

Your Canadian Council hosted a free breakfast, sponsored by C-PLAN, with featured speaker Rob Erdos, test pilot for Canada’s National Research Council. He gave a fascinating and very-accomplished talk about many of the aircraft he’s flown. It was a pleasure to get to know him and his wife, Debbie. They were camping not far from me in their recently completed RV-6 with its attractive red paint job with ribbons of different colours. 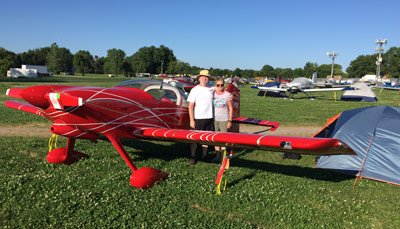 Rob and Debbie Erdos with their RV-6

You can read a separate article in this issue about the use of CANPASS and how good the Canadians are at facilitating border-crossing for pilots.

It is always a pleasure to view such well-built and cared-for aircraft at EAA AirVenture. This year’s winners of awards were mostly from the United Sates, but three Canadians deserve congratulations for the following awards. Over 100 awards were given out for all classes. Read about them here. Please join me in congratulating our compatriots.

Well done to all Canadians who entered their aircraft for judging, especially Paul, Peter, and Doug. If you know them, why not swing by their hangars, give them a pat on the back, and let them know they got a Canadian “honourable mention” in Bits and Pieces.

There were three or four “must-see” movies at Oshkosh this year. I had put them all in my calendar and didn’t get to any of them! That just indicates how busy one can get during a fabulous week of aviation saturation. I guess the movies can wait. It was delightful to meet so many of you this year, and especially the folks at the homebuilt camping section, including my very nice neighbours. I got to meet Jessica Cox in person (an accomplished pilot who was born without arms), and she’s as delightful face-to-face as she seems to be in the media. Not wishing to embarrass her, I privately struggled with how to give her a business card since she’d asked for my contact information. She quite naturally took the card with her foot and tucked it away for future reference in her bag.

Burt Rutan presented his design for a float/ski/land plane, which is permanently configured for all three uses. It was great to sit near the front row and hear the great man in person. He’s a natural presenter, simultaneously proud of his many achievements and sincerely humble and supportive of those around him. 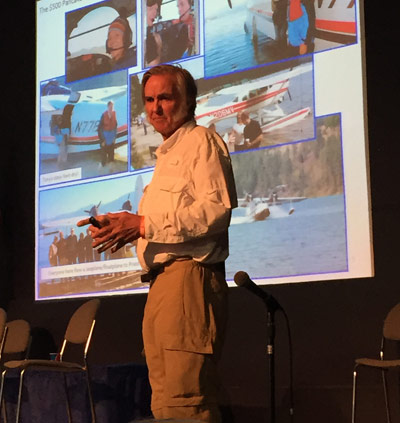 The EAA published some interesting facts and figures immediately after the show. Did you know that over 10,000 aircraft landed at Oshkosh and surrounding airports? There were over 550,000 attendees at the show, an increase of around 2 percent. There were over 2,600 showplanes, including over 1,000 homebuilts. There were over 1,000 forums attended by 75,000 people. A total of 485 Canadians registered at the International Visitors Tent, but this is probably significantly underreported since many do not bother to locate the International Visitors Tent to register.

With new showers and washrooms and a nice assembly area in the morning and evening, the homebuilt camping area was delightful. Coffee was available for a donation, and ice was $3 a bag. Thanks to all the Oshkosh volunteers who make this such a success. The CEO of the company I worked for once said “There is an infinite opportunity to improve everything.” If you don’t believe him, just look around at Oshkosh. See you there next year. Trust me, it’ll be even better.