September 2016 - Not many GA aircraft are affected by the subtle difference between “service ceiling,” “maximum absolute altitude,” and “maximum operational altitude,” because the differences are affected by cabin pressurization and flight levels into which not many of us can actually venture. The maximum operational altitude for pressurized cabins is the altitude at which the cabin can stay at its certified pressurized altitude.

The definition of the service ceiling is the height above sea level at which an aircraft with normal-rated load is unable to climb faster than 100 feet per minute under standard air conditions.

A service ceiling is not really an absolute limit on the altitude that a particular design can achieve, but one at which the aircraft begins to run out of climb capability. The absolute altitude is a measure of how high an aircraft can climb, when it runs out of any further climb capability, under normal-rated load. 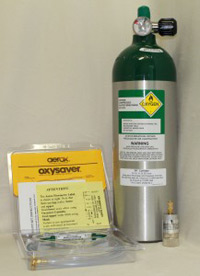 The editor’s RV-9A has a service ceiling of 24,500 feet. In other words it could even keep climbing slowly beyond that. The RV-6A has a service ceiling of 25,700 feet. A Cessna 172 has a service ceiling of 14,000 feet, and a V-tail Bonanza has one of 18,500 feet. So here is an interesting question: How many homebuilt aircraft are there operating with oxygen? One booth at AirVenture 2016 was presenting their basic kit, with nasal cannulas and delivery system for about $400 U.S. A good estimate of groundspeed gained with altitude is 2 percent of indicated airspeed per 1,000 feet of altitude. As a fairly good estimate, flying at the max altitude for rated oxygen systems (18,000 feet) at 135 knots indicated airspeed would get an extra 36 percent true airspeed or 184 knots over the ground. Getting to that service ceiling with the right oxygen would achieve over 200 knots and get you where you’re going 50 percent faster. An added wrinkle is that the higher you go, the more oxygen you need, and therefore the bigger the tank is required, unless you use an oxygen concentrator.

We’d be interested to know if there are any of you routinely flying with oxygen at high altitudes. If you do we’d love to hear from you and maybe have you share an article with the rest of our readers. A question you might like to think about is: “Does the oxygen system pay for itself by increasing groundspeed?”