December 2017 - At a preflight walk-around, we noticed a crack on the right-hand step of our RV-9A. Looking back through our tech logs, we pinpointed that this occurred at around 300 hours on the airframe.

We welded the step to make it serviceable again, but the crack reappeared at 475 hours.

This type of fracture is indicative of fatigue failure. Fatigue failure will occur in a metal component when it is flexed both positively and negatively across its neutral axis. Its likeliness to occur is increased where there is a stress concentration such as is caused by a nick or another defect. It is also enhanced by a more brittle composition as is created by welding. In our case, we also added to its potential for fatigue by chrome-plating the steps, causing a more brittle steel component.

My theory is that the pulsations of airflow caused by our propeller produced the flexing, and welding the vertical airfoil section to the mounting plate together with the chrome-plating process, provided the stress concentration.

When we detected the crack, it had progressed all the way around the airfoil section, with only a small portion of the front holding the step in place. Good thing too, because continued use of this defective step would have resulted in complete separation, with a skinned shin and possibly a damaged flap.

Also, in our case the right-hand step was probably used less than one-half as often as the left-hand one, so stepping on and off of a step seems not to have been any part of the cause of failure.

Our first repair obviously did not solve the problem. For our second repair, I formed an airfoil sleeve, 12 gauge by 1 1/2-inch long of 4130 steel, to fit snugly inside the airfoil section of the step at the fracture point. I drilled two 3/8-inch diameter holes – one above and one below the fracture in the step component, as shown in the photo. Rewelding the fracture and rosette-welding the holes in the step to the inserted sleeve completed our repair. We protected the paint surface during the welding by taping metal protection plates around the weld area. 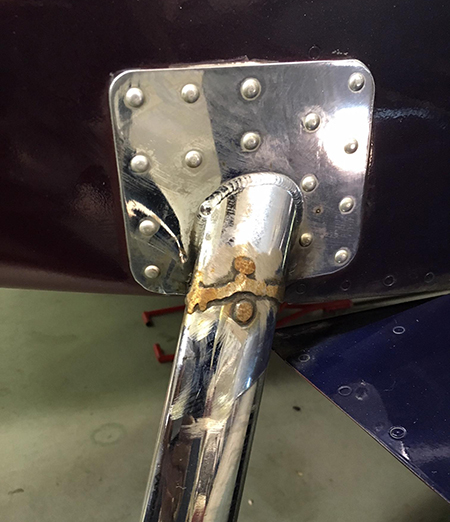 The reinforced and repaired RV step

Other repair methods have also been used, such as welding a plate over the top of the fractured area of the step.

Some builders of Van’s RV aircraft have also elected to mount the step to the fuselage using bolts with nut plates on the inside rather than solid rivets, so that the step can be removed easily and replaced with a new one.

We now have 734 hours since this repair with no indication of any additional problem on either step.