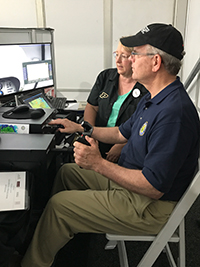 Huerta served for five years in the FAA’s top position and kept numerous GA issues at the forefront during his term. Among them were the introduction of the BasicMed medical certification process, an updated hangar-use policy that allowed homebuilding as a recognized aeronautical activity, and the Affordable Safety initiative that created a process to bring safety-enhancing equipment into a broad spectrum of type-certificated aircraft. Huerta also made annual visits to Oshkosh to participate in a public Meet the Administrator forum as well as news conferences open to the hundreds of media representatives who attend AirVenture.

“Huerta put EAA AirVenture Oshkosh on his schedule every year and was always transparent and approachable in answering our members’ questions,” said Sean Elliott, EAA vice president of advocacy and safety. “He has been accessible, reasonable, and always willing to listen, even if we sometimes didn’t agree. We wish him the best in his pursuits outside the FAA and thank him for his many years working with us.”

Elwell, a pilot, most recently served in the capacity of FAA deputy administrator since his appointment by President Donald Trump in June 2017. A nominee for FAA administrator has yet to be named, and Elwell will continue to fill the role until the next administrator has been confirmed by the Senate.

“We already have an established relationship with Acting Administrator Elwell, who has been a member of the FAA’s delegation at Oshkosh, and we look forward to growing that relationship in the coming year,” Elliott said. “Paul Poberezny always placed value on finding good people within the FAA and working with them to achieve a common goal, and we will continue to do just that.”