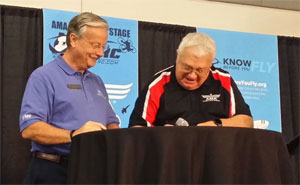 January 13, 2016 - The Experimental Aircraft Association (EAA) and Academy of Model Aeronautics (AMA) signed a memorandum of understanding that expands the organizations’ joint efforts to bring the possibilities of flight to more people.

The memo, signed during AMA’s annual AMA Expo in Ontario, California, builds on the original memo of understanding the two aviation associations signed in 2010. Over the past five years, EAA and AMA have worked together to help people discover flying activities and introduce and support aviation to the public.

“There has long been a connection between the aircraft modeling community represented by AMA and the world of grassroots aviation with EAA,” said Jack J. Pelton, EAA chairman and CEO. “Working with AMA over the past five years has built a strong foundation in areas such as integrating the AMA student membership into EAA’s Flight Plan program, an increase of aeromodelling activities at EAA AirVenture Oshkosh, and more combined EAA and AMA activities on the local level.”

The new memo of understanding outlines areas where EAA and AMA will work together in program development, promotion, and advocacy. Other areas of emphasis will include youth education programs and visibility at major events, including EAA AirVenture Oshkosh and AMA Expo.

“The AMA and its members are excited to continue our partnership with the EAA and begin work on how both organizations through our combined efforts and activities will promote and increase aviation participation across all age groups,” said Bob Brown, AMA president. “During the past five years, both organizations have achieved some excellent results, and we expect the future will deliver even more.”

EAA and AMA will create a joint working group to further explore possibilities for joint activities and programs that could inspire youth and adults to further explore ways to get involved in model aviation or recreational flying. The agreement also provides for increased visibility of each organization in the other’s outreach and communications channels.