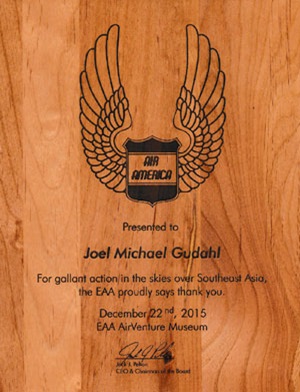 January 13, 2016 - EAA presented a plaque to the sister of a fallen Air America pilot in December in recognition of his service supporting America’s troops during the Vietnam War.

When a group of Air America veterans visited EAA in November, one of the pilots shared that the body of a fallen comrade, Joel Gudahl, was recently recovered and that his family had never received any items of recognition for his service. Gudahl was copiloting a C-123 Provider over Laos when it crashed into a mountain on August 27,1972.

Upon hearing this story, EAA’s Chris Henry, membership services representative, and Mike Hertz, supervisor of buildings and maintenance, teamed up to create a plaque for Gudahl’s family that states: “To Joel Michael Gudahl for gallant action in the skies over Southeast Asia, the EAA proudly says thank you.”

The award was mailed to Gudahl’s sister, Pam, as a special surprise for the holidays, and she recently called to express her thanks.

“Just knowing that there are folks who care means so much,” Pam said. “It helps give us some closure.”