Farewell to a Friend

By Jack Hoke and Ryan Mudry

This story was originally posted on the General Aviation News website. Reprinted with permission.

Life has a way of coming around full circle, just one of the many lessons learned through owning a Luscombe.

Another is that you never know where that Luscombe will take you and who you will meet along the journey.

Our journey began in 2007, when my wife Sally and I embarked on the search for an aircraft for our personal use. A licensed private pilot from the 1970s, I had taken a 20-year hiatus from flying while our children attended college. Sally, who soloed in the 1970s but then abandoned pursuing her certificate, was game.

The search was initiated looking for a Stinson, but we soon found a 1949 Luscombe 8-F. Not familiar with the Luscombe brand, we took to the Internet to find out more. Our research eventually led us to Bill and Sharon Tinkler of Tullahoma, Tennessee, who became our mentors in all things Luscombe.

We were in Nashville, and the Luscombe for sale was in Lebanon, all very close together in the state of Tennessee. So we found ourselves on a cold winter’s day heading to Lebanon to look at the airplane once again. 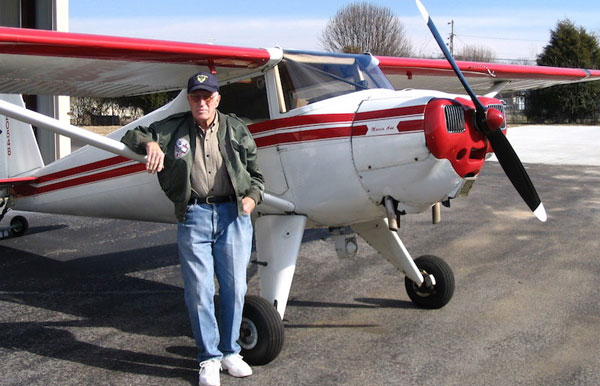 Ken Poley and the Luscombe

When I first spoke on the phone with Ken Poley, who had owned the Luscombe for 17 years, his first words to me were, “It’s not LSA,” and our relationship never really got much better after that. He did reveal a few things: He had worked for Piper Aircraft Co. in Lock Haven in his teens, had flown B-26s in the Air Force, and was an engineer. He was selling the Luscombe as he was of an age where he had chosen not to pursue his third-class medical.

That first meeting with the Luscombe was dreadful. It was a raw, cold winter day and there we were on the tarmac, learning that the Luscombe was an 8-F Special, meaning it had the Continental 90-hp engine, which had no starter or alternator. Consequently, the engine had to be hand propped to start, a talent with which I had no experience.

Ken provided direction to me as the starter, while Sharon held the brakes, but we achieved nothing other than a fully warmed up Jack. We decided to quit, rolled the plane back into the hangar, and Bill, Sharon, Sally, and I went to lunch.

Bill was strongly of the opinion this was an aircraft to avoid, noting that hand-propping would lose its attraction. Later, we learned that the Luscombe had been involved in an incident in which it got away from Ken while starting it by himself. It knocked him down and proceeded across the tarmac until it did considerable damage to a new BMW and a nearly new Mooney, requiring an engine overhaul due to the prop strike damage.

It is an axiom among Luscombe owners that their aircraft found them rather than the opposing consideration, and this Luscombe had spoken to me. Sally deferred to my desire, and Ken and I negotiated a deal, which included an IA’s review of its mechanical health.

Arrangements were made to fly it to Lewisburg, Tennessee, to have the evaluation performed, which was then rolled into our first annual. While the annual was being performed, another prior Luscombe owner and CFI, Mike Kellems, entered the shop. He agreed to teach me how to fly the Luscombe. The Luscombe remained tied-down at Lewisburg as I received 25 hours of instruction covering changes in regulations over my hiatus from flying, transitioning to a taildragger and the necessary license endorsement, buffing the rust off of any piloting skills I may have had and, of course, the required experience to insure the aircraft.

Owning the Luscombe in Middle Tennessee was a wonderful experience. We promptly named the plane Huckleberry after Mark Twain’s character Huckleberry Finn. We became frequent attendees to the Experimental Aircraft Association chapter-sponsored Saturday morning pancake breakfasts in Murfreesboro, Shelbyville, Moontown, and Winchester, and were welcomed into a new family of friends through the Luscombe. 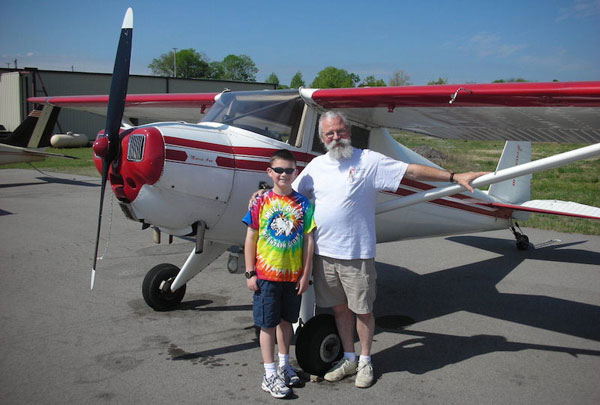 Jack Hoke and his grandson Brennan Maxwell with the Luscombe

Along with a new plane, 2007 brought yet another challenge for our family. We became third-generation owners of the Hoke family farm in Carroll County, Maryland. This was a once-in-a-lifetime opportunity to which we agreed sight unseen. While we bought the property in December 2007, it was 2009 before we could sell our home in Nashville and move to Westminster, Maryland. Exploration led us to 6W6, an airfield with a turf runway in Hanover, Pennsylvania, to house the Luscombe in a large common hangar.

We settled into our new community and learned our new roles as stewards of the farm. But little did we realize how much change we would experience, and how much it was to affect our use of Huckleberry.

Our close proximity to the Special Flight Rules Area (SFRA) around the nation’s capital curtailed opportunities for flights to the south. Soon our much-loved Luscombe was to find itself a neglected orphan. While we kept legal with timely annuals, there was little aviating.

There were two exceptions: An attempt to fly to Oshkosh in 2013 (which ended in Fort Wayne, Indiana, as a result of IFR-only weather conditions) and completion of the “Explore Maryland by Air” campaign in 2013.

In late 2013 we concluded that our commitments to farm, job, family, and an aircraft not welcome in the SFRA meant that the time had come for us to find a new steward for Huckleberry. Advertisements for sale produced a call from a young man who asked if this Luscombe had been Ken Poley’s.

A one-hour conversation ensued during which I was to discover much about the caller, Ryan Mudry, and Ken.

As we talked, I learned that when Ryan was just 9 years old, he scraped together $40 so he could join EAA. This membership allowed him access to the presidents of local EAA chapters, including Ken, who was president of EAA Chapter 863 in Lebanon, at the time.

Ryan called Ken. Their initial phone conversation was reported to have lasted over one hour while the professional engineer and pilot and the 9-year-old discussed everything about aviation, including Bernoulli’s Principle and Ken’s experience in the Air Force, where he was qualified in the B-25, F-102, F-89, and F-94C. The call ended with the invitation for Ryan to join Ken for an aviation outing to an EAA pancake breakfast.

Thus began a friendship that was to last nearly 20 years, with Ken mentoring the wannabe pilot, teaching him to hand prop the 90-hp Continental, introducing him to longtime friends as the Luscombe’s new starter, and allowing him training time in the Luscombe.

All of this led to introductions to three Congressmen from the state of Tennessee — Sen. Lamar Alexander, Sen. Bill Frist, and Rep. Jim Cooper — in a bid for the then-flying high school senior, with a perfect score on his SAT exam, for an appointment to the United States Air Force Academy. Sen. Alexander called Ryan on the day after Thanksgiving during his senior year and gave him the good news: He had secured the appointment.

Ken sold the Luscombe to us while Ryan pursued his aviation career at the academy, graduating as an officer and a pilot of the Air Force’s AC-130U gunship. 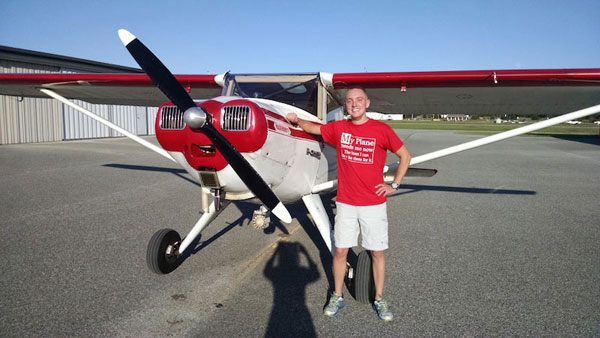 Ryan Mudry, the newest owner of the Luscombe

While Ryan reached out to ask about the Luscombe, he wasn’t really in the market for an airplane, just curious. But I knew that Ryan was who the Luscombe belonged with, so I soon called him back with an offer he couldn’t refuse, and the sale was completed.

Arrangements were made for hangar space in Florida at Peter Prince Field, and I flew the Luscombe from 6W6 to its new owner.

And so, yet another Luscombe friendship has been fostered, with the aircraft placed into the hands of a true steward.