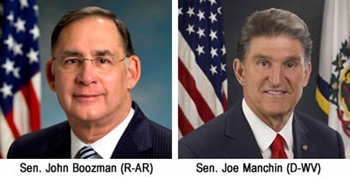 January 22, 2015 – The General Aviation Caucus in the U.S. Senate will have new leadership in the 114th Congress as U.S. senators John Boozman R-AR and Joe Manchin D-WV take the reins of the bipartisan group. They succeed Mark Begich D-AK and Mike Johanns R-NE, who are no longer serving in the Senate.

“We appreciate senators Boozman and Manchin stepping forward to lead this important caucus, especially with important general aviation issues ranging from medical certification reform to FAA reauthorization ahead in this session,” said Doug Macnair, EAA’s vice president of government relations. “It’s essential to have members of Congress who are aware of these aviation issues and in contact with organizations such as EAA to maintain the rights and privileges we have as aviators.”

As co-chairs, Boozman and Manchin will work to recruit members to the caucus and provide leadership as they work to inform their Senate colleagues about GA’s important contributions to the nation's economy and transportation system.

“In Arkansas, general aviation airports support more than $500 million annually in economic activity, and nearly 10,000 Arkansans work in aviation and aerospace manufacturing – many of them in the general aviation sector,” Boozman said. “If you crunch the numbers, most of our colleagues would have a similar story to tell.”

As a pilot, Manchin has a personal perspective on general aviation and as a former governor of West Virginia he recognizes what it means to his home state.

“General aviation makes a tremendous impact on West Virginia’s economy and on our nation as a whole,” he said. “The Mountain State’s aviation system alone supports more than 11,000 jobs in the state, and contributes about $616 million to our economy. As a pilot myself, it has always been a top priority of mine to address the unique challenges faced by the general aviation sector, and to foster business growth and job creation through this growing industry.”

EAA members are encouraged to urge their own state’s senators to become part of the Senate GA Caucus. You can find your state’s representatives through EAA’s Rally Congress website.