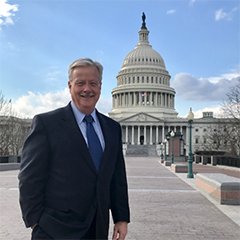 February 9, 2017 - EAA CEO and Chairman Jack J. Pelton spent several days in Washington, D.C., last week, meeting with lawmakers and aviation organizations to highlight the top issues for EAA members and general aviation. These meetings are especially important as the new Congress begins its work, with a number of matters that could greatly affect GA on the agenda.

Among the individual, meetings on Pelton’s schedule were ones with Sen. James Inhofe (R-Oklahoma), an EAA member and pilot who was a driving force behind the passage of the aeromedical reform signed into law last July. In addition, Pelton met with Reps. Sam Graves (R-Missouri), Todd Rokita (R-Indiana), and Ralph Abraham (R-Louisiana) – all EAA members. Another meeting included time with Rep. Roger Marshall (R-Kansas), who has a deep interest in aviation issues given the importance of the aviation industry in Kansas.

“These face-to-face meetings with key lawmakers, combined with this week’s EAA/FAA winter summit in Oshkosh, are part of the important daily advocacy work in support of EAA members,” Pelton said. “There is no substitution for direct conversations with congressional representatives and FAA policymakers on the issues that matter to general aviation. We will carry that message to Washington to ensure that GA’s voice is heard.”