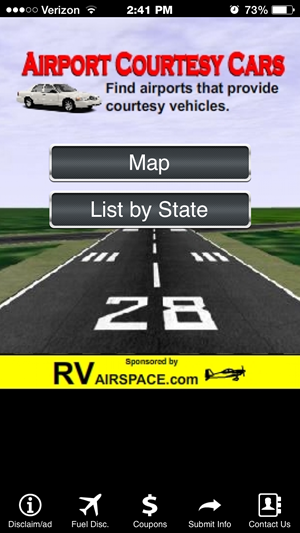 February 19, 2015 - Glenn Brasch, EAA 151265, of Tucson, Arizona, is a typical EAA member; he joined in 1980, attended EAA AirVenture Oshkosh about 30 times and volunteered at 10 of them. A retired professional pilot and homebuilder, Brasch completed his RV-9A in 2013 after more than 10 years working on it and flew it to Oshkosh last year. It was in planning for last year’s trip to KOSH when Brasch got an idea for a simple, free app for an iPhone or Android phone: List airports with available courtesy/crew cars for GA pilots.

“I started compiling a list, going through Air Nav and putting out requests for car locations,” Brasch said. “As the list grew I published it on my website RVairspace.com, and as it approached almost 1,000 listings I thought it would make a good app.”

The app is designed for smart phones – specifically Apple iPhones and Android – not for tablets (it can be loaded on iPads if the user searches for phone apps with an iPad). After several months of development the app lists more than 1,330 airports. It has two main functions: a state-by-state listing of airports with crew cars, and a Google map that can be zoomed in to view airport locations.

And you know what? It works. Just go to the state you’re looking for to see a listing of available airports and what each offers in terms of courtesy off-airport transportation and how to access it.

For example, here’s what it says about the Ephraim-Gibraltor Airport (3D2) in Door County, Wisconsin:

Ephraim. 920-854-9711 in Fish Creek, has bikes and a courtesy van. No landing fee if staying for less than four hours, they ask for donations for the van, though.

Pinehurst. A user comments that you have to be quick to get the car before the corporate jet jocks flying their bosses in for the golf in the area get them!

To download the app, visit Google Play for the Android version or iTunes for the iPhone.