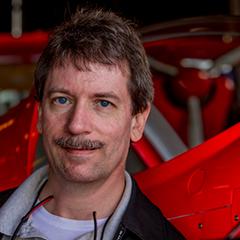 February 23, 2017 - Evan Peers of San Carlos, California, has been named editor of the International Aerobatic Club’s monthly magazine, Sport Aerobatics, beginning with the April issue. Evan, EAA 1150606 and IAC 437277, has served as IAC’s official photographer since 2015 and has provided photo coverage of EAA AirVenture Oshkosh and the U.S. National Aerobatic Championships in 2015 and 2016.

For the past 16 years, he has owned and operated Airspace Media which provides aviation and air show media content coverage to the industry including UAV, aerial, air-to-air photography, video, and social media.

Originally a software engineer by profession, he worked for Oracle USA for 19 years but now devotes his time to aviation photography and journalism. Several of his photos have appeared on the cover of Sport Aerobatics. In 2015, he accompanied the U.S. Unlimited Aerobatic Team to France as their photographer and videographer.

His work has been recognized by awards from National Geographic and Aviation Week & Space Technology.