Experimenter features to be included starting in July 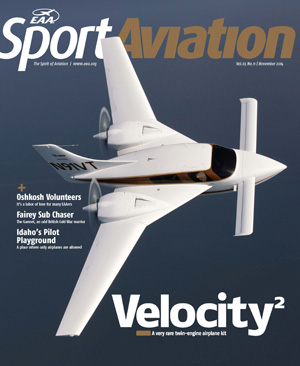 The expanded magazine will make its debut in July and include articles that were previously available only in the digital Experimenter magazine. This additional content will be featured in its own separate Experimenter section within Sport Aviation, which will also continue to encompass traditional homebuilt and ultralight features as in the past. The Experimenter will end publication as a stand-alone, digital-only offering following the May 2015 issue.

“This addition to Sport Aviation is in direct response to the feedback we receive by surveying more than 4,000 EAA members each month, who have requested to see this content in their monthly magazine,” said Rick Larsen, EAA’s vice president of communities and member programs. “This addition is aimed at having an increased focus on ‘How do I…?’ information about building, restoring, and flying. We’ll also emphasize greater use of stunning photography from the world’s best aviation photographers.”

Current EAA members will receive the expanded magazine at no additional charge in either print or digital format. Non-members who received Experimenter will have the opportunity to receive Sport Aviation as part of their membership by joining EAA.

The magazine upgrades are being spearheaded by EAA’s publications team, led by Director of Publications Jim Busha. In addition, longtime EAA and Experimenter editor Mary Jones will continue to contribute to the new Sport Aviation section, bringing her extensive insider’s knowledge and experience to the expanded publication.

“This expansion is made possible because of the support we’ve received from EAA members, as well as the aviation community and companies that connect to our members through the pages of Sport Aviation,” Larsen said. “The magazine will reflect EAA’s dedication to grassroots flying while continuing to recognize the diverse interests of our members throughout all segments of recreational aviation.”