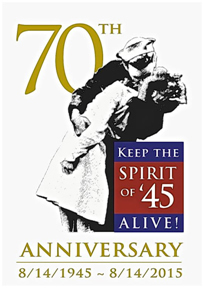 April 1, 2015 - EAA Warbirds of America has partnered with “The Spirit of ’45” initiative and its World War II Airpower Legacy Project to recognize and honor those who contributed to the war efforts some 70 years ago. WWII vintage aircraft will be taking to the skies over communities across America on the weekend of August 15-16, 2015, as part of a nationwide commemoration of the 70th anniversary of the end of WWII.

The project’s goal is to pay tribute to the pivotal role American airpower played in achieving victory in the most destructive war in history, and to stress the importance of ensuring these historic aircraft are preserved so that they can continue to educate and inspire future generations.

The WWII Airpower Legacy Project is a grassroots initiative led by the Air Force Association, the EAA Warbirds of America, the Commemorative Air Force, and a growing community of air museums and private collectors.

Owners of WWII aircraft are being encouraged to register to participate in August so they can be included in a map to help publicize their flyovers. Other groups are developing plans for similar “signature” projects commemorating the 70th anniversary this year to honor the WWII legacy of America’s ground forces, the seaborne services, and the home front.