April 12, 2018 - Dan Patterson, a pilot, historian, photographer, and National Park Service artist-in-residence, has completed a series of unique art installations devoted to the Wright brothers in and around Dayton, Ohio. Patterson’s works consist of semi-translucent life-sized photographs that are strategically placed to show the brothers and their early aircraft at key historic locations in the area defined as the Dayton Aviation Heritage National Historical Park.

The first was installed at Huffman Prairie, the field where the Wrights continued their testing after their initial success at Kitty Hawk, North Carolina. Huffman Prairie is where the brothers developed history’s first practical airplane, their 1905 Flyer III, which is depicted in Patterson’s artwork as if it is emerging from the recreation of the original rudimentary hangar. 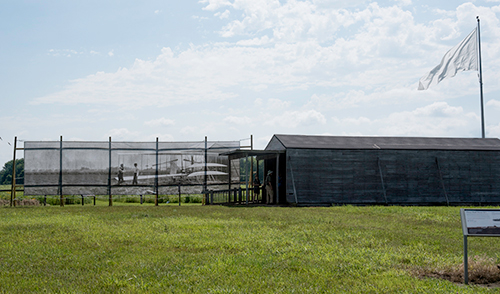 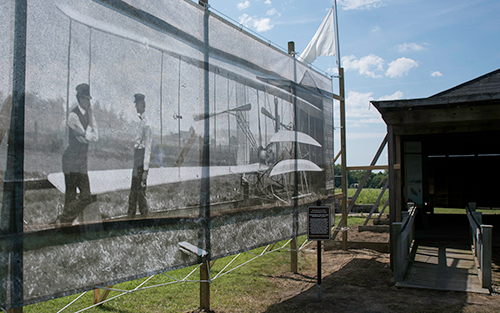 The other two installations are set up at the sites of the Wrights’ original bicycle factory and their private home. These locations are empty lots, as the buildings were moved to Greenfield Village at the Henry Ford Museum in Dearborn, Michigan in the 1930s.

The Wright Cycle Company (not to be confused with the Wright Cycle Exchange, which is still preserved and open for public tours) at 1127 West Third Street in Dayton is where the brothers built their aircraft, as well as their first wind tunnel, between 1900 and 1905. Patterson’s photos show the Wrights diligently working at their workbenches, just as they would have more than a century ago. 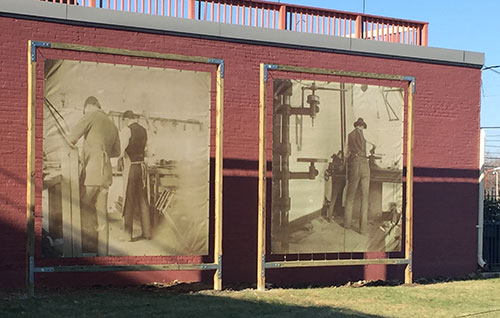 The brothers shared the home at 7 Hawthorn Street, just a few blocks from the Wright Cycle Company. This is where the muslin fabric for the wings of their gliders and powered aircraft were sewn from 1900 to 1905. Patterson’s photo at this site is a familiar one, showing Orville and Wilbur sitting on their porch in a rare moment of relaxation. 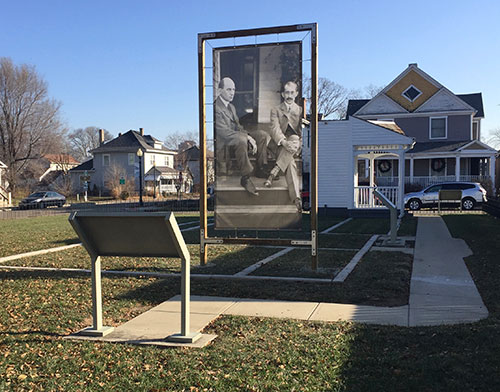