April 16, 2014 - Charlie Becker’s role at EAA is expanding, as the current director of communities and 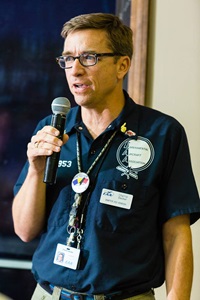 homebuilt community manager has been named director of chapters. In that role, Charlie, EAA Lifetime 515808, will work to build and maintain relationships with EAA’s 900 local chapters, support their growth, and help them serve as aviation beacons in their communities.

An avid homebuilder, Charlie has been a member of five EAA chapters: 32 in St. Louis, Missouri; 186 Manassas, Virginia; 444 Appleton, Wisconsin; 252 Oshkosh, and 524 Frederick, Maryland. He has served as a chapter officer for over 10 years and is currently president of Chapter 252.

“For me personally, my two favorite things about EAA are homebuilding and chapters,” he said. “I'm thrilled that I get to use my skills to help chapters be successful, grow, and serve as passionate outlets for grassroots aviation.”

Charlie has been on the EAA staff for 14 years. Many members are familiar with his work creating EAA’s “Hints for Homebuilders” weekly video series, EAA’s well-attended webinar series, as well as organizing the One Week Wonder effort at EAA AirVenture Oshkosh 2014, among other homebuilt-centered initiatives.

“I had the good fortune to call EAA founder Paul Poberezny a friend,” Charlie said. “I know Paul would have wanted me to take on this challenge and there is absolutely no way I’m going to let him down. To me, chapters are the very essence of EAA and the embodiment of the spirit of aviation.  We have to do everything we can here in Oshkosh to make our chapters thrive and be successful.”
To provide a better user experience, EAA uses cookies. To review EAA's data privacy policy or adjust your privacy settings please visit: Data and Privacy Policy.