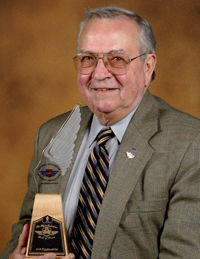 May 5, 2016 – Jack Eggspuehler, who founded the National Association of Flight Instructors and served on the EAA board of directors from 1995-2001, died on April 30 at age 86. Funeral services were held Wednesday in Columbus, Ohio. Sean and Rene Elliott represented EAA at the services, as Sean was the first executive director of NAFI when it affiliated with EAA in the mid-1990s.

Eggspuehler was named an EAA director emeritus in 2002 following his retirement from the EAA board. That same year, he was inducted into the Flight Instructors Hall of Fame. Eggspuehler had a distinguished aviation career that included service in the U.S. Air Force during the Korean War, participation in the U.S.-Soviet Pilot Exchange in the 1970s, and chairing the aviation department at The Ohio State University.

EAA extends its condolences to Eggspuehler’s family. A complete obituary is available at the NAFI website.