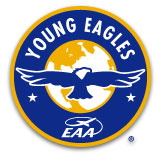 the contest to show his appreciation for EAA volunteer pilots who generously give their time flying Young Eagles. Each volunteer pilot who flew at least one Young Eagle from July 1, 2014, to March 31, 2015, was automatically entered. The winners were selected by a random drawing and include:

Thanks to all pilots who entered the contest by flying Young Eagles during the sweepstakes period!