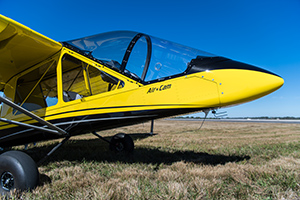 May 18, 2017 - In celebration of the 25th anniversary of its Young Eagles program, EAA has announced that it will hold a volunteer build of the unique twin-engine, open-cockpit Lockwood AirCam, to be used for flying Young Eagles out of Pioneer Airport in Oshkosh. During the EAA AirVenture Oshkosh season it will also allow EAA staff to do air-to-air photography with the slower aircraft in attendance such as ultralights and lightweight homebuilts.

The goal is to have the aircraft complete by the end of the year, through six one-week build sessions, the first of which has been scheduled for June 5-9. Volunteers will have the chance to stay at EAA’s Air Academy Lodge and will work for eight hours a day under the supervision of EAA aircraft maintenance technician Tracy Buttles, who previously was a key member of EAA’s One Week Wonder and Give Flight builds.

Anyone from novice to experienced builders is invited to sign up to share their time, however each build session will be limited to 12 volunteers. Those interested must fill out the AirCam workparty application to be considered.

“Who wouldn’t want an AirCam for their 25th anniversary?” said Charlie Becker, EAA director of chapters, communities, and homebuilt community manager. “Young Eagles deserves an AirCam. We’re excited about having such an aircraft available for EAA that give the kids an amazing Young Eagles experience.”