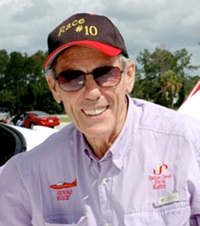 July 6, 2016 - Keith Phillips from the Spruce Creek Fly-In Community in Florida, is the 2016 recipient of the EAA Tony Bingelis Award. He serves as an ambassador for experimental amateur-built aviation that extends well beyond his role as technical counselor for Chapter 288. He also serves as a technical counselor for other chapters that don't have a technical counselor of their own. As a former fighter pilot and extensive builder, he is knowledgeable and willing to share this knowledge with everyone. He has built several aircraft, including a Cougar/Tailwind, Pitts Model 12, and SX-300. As a resident of Spruce Creek, Phillips has promoted EAA and aircraft building to many people. He has given countless rides in his aircraft and organized flights for those interested in building or owning an experimental amateur-built aircraft.

Phillips has been instrumental in keeping the SX-300 design alive by providing technical support and promoting its virtues to others. Annually, he hosts a safety gathering of SX-300 builders and pilots to go over the operational issues and building issues of the SX-300 as well as doing a lot of flying.

For many years, Phillips, EAA Lifetime 5973, served on EAA's Homebuilt Aircraft Council, where his practical, real-world wisdom was highly valued by other members and EAA staff. Phillips has been an EAA member since 1959 and is also a member of IAC and Warbirds of America.

Each year he participates in the AirVenture Cup Race that promotes homebuilt aviation.

According to Chapter 288 President Dave Gitelman, Phillips is the "most generous person with his time and expertise as anyone I have met in my life." According to Charlie Becker, EAA’s homebuilt community manager, “Other than Paul Poberezny, I can think of no one that has done more to promote EAA and amateur built aviation at the grass roots level. Like Paul, he has a natural charisma, a love of all aviation and a willingness to share with everyone."

Phillips will receive the Tony Bingelis Award on Thursday, July 28, during EAA AirVenture Oshkosh at the Homebuilders Dinner. Tickets for the dinner will be available at Homebuilders Headquarters on the EAA grounds.

The Tony Bingelis Award recognizes EAA technical counselors for dedicated service and significant contributions in assisting members to safely build and restore aircraft. Recipients are chosen by the EAA Homebuilt Aircraft Council as being outstanding examples of people whose contributions have positively affected members’ aircraft building projects. Honorees are commemorated in a permanent display at the EAA AirVenture Museum in Oshkosh, Wisconsin.