September 10, 2015 - Luminaries from throughout the aviation world will be the judges as the Experimental Aircraft Association invites innovators to enhance aviation safety for amateur-built aircraft through its Founder’s Innovation Prize competition. The competition, first announced at EAA AirVenture Oshkosh 2015, will begin accepting entries on October 1, 2015.

The competition will use the best ideas from EAA members and chapters, with the encouragement of cash prizes for the best emerging technology. The annual prize will have a specific safety focus each year, with the upcoming year’s goal emphasizing the design and development of a low-cost solution that recognizes imminent loss of control (LOC) in aircraft and provides an innovative way of increasing situational awareness or automation to the pilot. 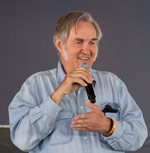 Burt Rutan, legendary designer of SpaceShipOne – which in 2004 became the world’s first successful civilian spacecraft – as well as creator of dozens of other aircraft, has agreed to serve as chief judge for the five-member group.

Other judges on the panel will include:

Dick VanGrunsven – Designer of the Van’s RV series of aircraft kits, which are the world’s most popular kit design with more than 9,000 completed aircraft now flying worldwide.

Rod Machado – Best recognized as a renowned aviation safety speaker, he also has more than 10,000 hours of flight instruction time and is recognized as the voice of Microsoft’s Flight Simulator software.

Dave Morss – One of the country’s preeminent civilian test pilots and air racers, Morss has tested hundreds of aircraft designs and also appeared on the TV series MythBusters as an expert on aircraft design and safety.

The competition’s judging criteria and timeline is also innovative. Entrants will focus on cost, ease of installation, simplicity, wide applicability, and effectiveness in reducing loss-of-control occurrences. Entries will be accepted beginning October 1, 2015. The top five entries will be invited to a presentation at EAA AirVenture 2016, where judges will review and critique the five innovations in a live, Shark Tank-style program. The best concept will receive a $25,000 cash prize, with second place receiving $10,000 and third $5,000.