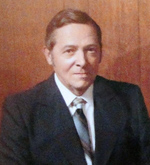 September 16, 2015 - Bob Irwin, co-founder of Aircraft Spruce, passed away on June 26, 2015, in Lake Havasu City, Arizona, at the age of 95. Along with his wife, Flo, he started Fullerton Air Parts in 1955, Aircraft Spruce in 1965, and ACS Products Co. in 1983. Irwin held a doctorate in chemical engineering from the University of Missouri and worked for Aerojet General in propulsion testing during the 1960s. He was a Link trainer instructor during World War II and became a pilot in 1948. Over the next 50 years Bob logged more than 2,200 hours in his Vultee BT-13, Navion A model, and Navion Rangemaster.