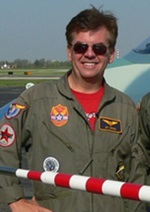 September 17, 2015 - Stanley Jay Gordon Jr., of Louisville, Kentucky, died September 12 at the age of 61. Gordon, who served on the EAA Warbirds of America board of directors, was president and founder of Gordon-Darby, Inc. and started the Gordon Foundation in 1995. An accomplished aerobatics pilot, Gordon performed in Thunder Over Louisville for the past 15 years, in addition to many air shows around the country. For more information, read his full obituary.