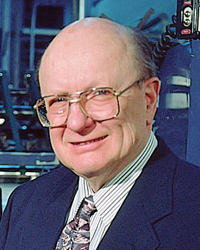 September 24, 2015 - Ray Scholler, EAA Lifetime 4000, died September 20 at age 97. Ray, who lived in Random Lake, Wisconsin, was a pillar of EAA – he became a member in the 1950s and helped with countless fly-ins and chapter events. Camp Scholler on the AirVenture grounds was named in 1988 for him and his wife, Bernice, to honor the tireless effort they put into preparing the EAA grounds for the association’s move to Oshkosh. Ray earned the Freedom of Flight Award in 1991 and the Chairman’s Award in 1994, among many other recognitions.

In addition to their integral role in EAA, Ray and Bernice owned Times Printing Co. as well as Scholler Photography Studio. Ray joined the fire department in 1938 and was an active member until his death; he was one of the first four EMTs in Random Lake and led fundraising efforts to purchase the village’s first ambulance. For more information, read his full obituary.