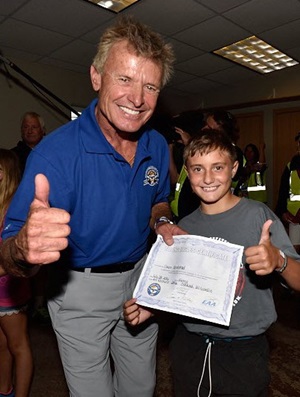 September 29, 2016 - EAA Young Eagles chairman and aerobatic pilot Sean D. Tucker has been named the recipient of the Lloyd P. Nolen Lifetime Achievement in Aviation Award, presented annually by the Commemorative Air Force (CAF) Wings Over Houston Airshow. Tucker performs in air shows all over the world, is recognized as a leader in the aviation industry, and has won numerous aerobatic championships throughout his career.

“I’m honored to be recognized with an award named for Lloyd Nolen, a man who inspired us to celebrate aviation and to preserve and remember our history,” Tucker said. “I also look forward to returning to Houston in the fall to fly in this year’s CAF Wings Over Houston Airshow, which is recognized by the industry and performers as an outstanding show and as a longtime Houston family tradition.”

Tucker will fly his custom-made Oracle Challenger III airplane as one of the featured performers at the 2016 CAF Wings Over Houston Airshow on October 22 and 23, 2016, at Ellington Airport.

The Lloyd P. Nolen Award is presented to an individual, organization, or company for lifetime achievement and promotion or advancement of aviation. Nolen, a humble and noble visionary, was a founding member and dynamic force of the Commemorative Air Force.

“Sean is most deserving of this award not only for what he does in the air but also for his contributions to aviation and air shows overall,” said Airshow Director Bill Roach. “It’s a rare privilege to see Sean fly. More than half of his maneuvers have never been duplicated by another aerobatic pilot. He’s a fan favorite all over the world, and we’re always honored to have him in our line-up and grateful for his help in publicizing our show.”

Tucker has been flying air shows worldwide since the mid-1970s and has won numerous aerobatic competitions. He has flown more than 1,200 performances at more than 475 air shows in front of more than 105 million fans.

Among Tucker’s many honors, he is an inductee to the National Aviation Hall of Fame and the International Aviation Air and Space Hall of Fame. In 2003, Tucker was selected as one of the 25 Living Legends of Flight by the Smithsonian National Air and Space Museum, joining an elite group of aviators and astronauts including Gen. Jimmy Doolittle, Gen. “Chuck” Yeager, and John Glenn.

Tucker also is very active in the community. He is the founder and president of the California-based nonprofit Every Kid Can Fly, which facilitates transformative life experiences in education and aviation for at-risk and underprivileged teenagers. In 2013, Tucker was named chairman of EAA Young Eagles, which has flown more than 2 million young people ages 8-17 free of charge and inspiring engagement in aviation.

The 2016 CAF Wings Over Houston Airshow will feature Tucker, U.S. Navy Blue Angels and many other performers. Visit the air show’s website for show updates and to purchase tickets in advance.