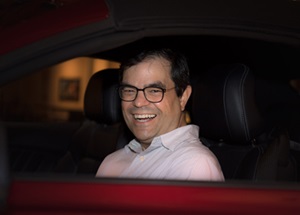 Lambiza, who traveled to Oshkosh from Portugal, said he purchased his winning ticket from the Ford Hangar because, although he didn’t expect to win, he wanted to support the Young Eagles Program.

“Every time I come I enter and I convince everyone to enter,” he said. “It’s a very dear cause to us all. It’s independent of the car, which is very nice. The cause is very important.”

The raffle, held every year during AirVenture, raises money for EAA’s Young Eagles program, which provides youth ages 8-17 with free first flights in general aviation aircraft to support EAA’s mission of growing participation in aviation a cause that Lambiza strongly supports.

“Getting young people into a private plane and to get them to feel and have fun other than what you would do commercially is very important we do need a next generation to pick it up,” he said.

“EAA is … an incredible organization,” he said. “We have nothing like that [in Europe] and we’re happy to be a part of international EAA and this kind of program is something that we definitely want to keep up and amplify. And we’re very happy with the 2 millionth kid flying in the young eagles so very impressive.”

In addition to the Mustang, provided by Ford Motor Company and Kocourek Ford of Wausau, Wisconsin, a second prize of $5,000 was awarded to Scott Ross or Whippany, New Jersey, and third prize of $2,500 went to David Besterfeldt of Crystal Lake, Illinois.

Raffle tickets can be purchased at the EAA AirVenture Museum and at designated areas on the AirVenture grounds during the convention.