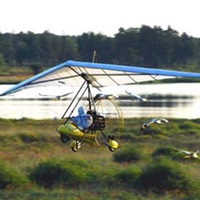 November 5, 2015 - A petition has been set up to urge the U.S. Fish and Wildlife Service to reconsider its plan to end the use of ultralight-guided migration of endangered whooping cranes.

The use of ultralight-guided migration was initially set up because as older birds in the species die off, there are no birds to guide the younger cranes south along safe migration patterns.

Ultralights are able to guide young whooping cranes to their destination, and the birds remember that pattern and are able to follow it back north in spring.

This method of assisting the migration of whooping cranes has shown higher rates of survival of adult birds from year to year and of young birds to one year of age than direct autumn release, a common alternative method.

Learn more about the issue from the Whooping Crane Eastern Partnership. A petition to continue ultralight-guided migration is available here.