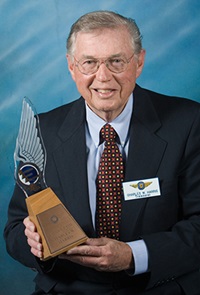 December 14, 2017 - EAA is saddened by the passing of a legend in the vintage aviation community, as Charlie Harris of Tulsa, Oklahoma, died on December 9 at the age of 90. Harris was a founding member of EAA’s Antique/Classic Division, now the Vintage Aircraft Association, in the early 1970s and served on its board until 1988 and as a director emeritus until his death. He was inducted into the VAA Hall of Fame in 2006, one of many aviation honors he received during a lifetime of participation in aviation.

Memorial services will be held on Saturday, December 16, in Tulsa. We are honored that VAA is named as one of the organizations to which memorials in Harris’ name may be made.