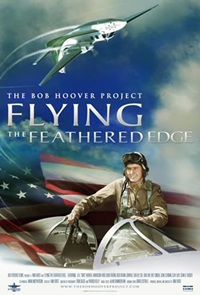 In Flying the Feathered Edge, Hoover reveals hard-earned wisdom from a life spent pushing the edge of the flight envelope while contributing to aviation’s many developments.

“This film captures my life story in an authentic and accurate way,” Hoover said. “I don’t know how it could have been done any better.”

EAA Chairman Jack Pelton calls it “the best aviation documentary I have ever seen.”

The film was made by award-winning producer, director, and editor Kim Furst, whose previous efforts include One Six Right, Discovery Channel’s Rocket Challenge, and Wings Over the Rockies.

Flying the Feathered Edge is available exclusively through the Bob Hoover Project website. The DVD is priced at $28.95, and the Blu-ray is $32.95.