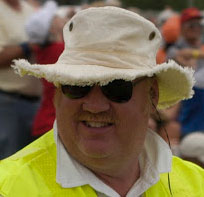 Phil Blake (EAA 27663) grew up in DeKalb, Illinois, just 35 miles away from Rockford, the home of the EAA fly-in during the 1960s. That made it easy for Phil’s parents to pack up their camper and Phil for a week or two prior to what was then known as “Rockford.” Phil’s first trip was in 1965 and, as he put it, “Fifteen years old, nothing to do, and a week or more before the air show. Boring. So I started volunteering.” After that, he became a lifetime volunteer. Phil’s first volunteer job in 1966 was looking for cables that were set as row markers for aircraft camping. Through the years, Phil has worked with such legendary EAA member volunteers as Marty Haedtler and Art Morgan, as well as Dale Crites, owner of the 1911 Curtiss Sweetheart pusher aircraft that is today in the EAA AirVenture Museum.

Today, Phil continues to work with aircraft parking as a Volunteer Chair in Vintage aircraft parking. He notes that one of his essential job is setting out the recognizable green cones that mark the parking rows. As Phil puts it, “My first job was looking for airplane rows and I’m still doing it.” He has also done everything from rolling the aircraft parking areas and mowing to distributing scooters, golf carts, and Gators to the Vintage volunteers.

Even outside of AirVenture week, Phil is a regular volunteer at EAA’s South Maintenance Fabrication Shop. Some of his handiwork are new additions to the grounds – assisting with the fabrication of the new blue water fountains that made their debut in 2014.

Apparently, that’s not enough. Phil is also taking on an additional role in 2015 as host at the Audrey’s Park volunteer campground. There he’ll assist other volunteers who stay there.

Look for Phil in Vintage parking or hanging out with fellow campers in Audrey’s Park during EAA’s AirVenture Oshkosh ’15.