Collection has never before been on loan to another museum 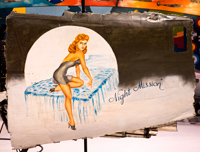 EAA AVIATION CENTER, OSHKOSH, Wisconsin — (November 10, 2015) — More than 30 pieces of nose art from actual World War II combat aircraft are making their first-ever trip outside their home museum, with the EAA AirVenture Museum in Oshkosh chosen as the first public display location for this rare collection.

The collection from the Commemorative Air Force (CAF) headquarters in Dallas, Texas, made its debut in time for Veterans Day after a month of preparation in the EAA museum’s Eagle Hangar, which honors the people and aircraft of World War II. The artifacts have been designated by the National Trust for Historical Preservation as an official project of Save America’s Treasures, which seeks to preserve historic structures, art and published works throughout the nation. It will be on display at EAA throughout 2016.

“This collection is simply incredible; there’s no other way to put it,” said Bob Campbell, director of the EAA AirVenture Museum. “We’re honored to be the first museum chosen by the CAF to receive this priceless collection on loan. It tells a unique story of the common soldier and airman during World War II, how this artwork was created, what it meant to these young men mostly between 18 and 25 years old, and the individual tales of these aircraft that returned along with those that didn’t.”

The nose art was common on the bombers and fighter aircraft of the era, and displayed the creativity of crews at air bases around the world. As was the custom during World War II, some of the nose art depicts slogans or places, but many of them included drawings of young women in poses from chaste to extremely provocative. Some of the most risqué art has been moved to the Eagle Hangar’s “Top Secret” area, which also includes a surplus atomic bomb casing from the end of the war.

Each piece of artwork in the collection, which arrived in six semi-trailers in late September, includes an interpretive panel that describes the aircraft from which the artwork came, its history and any back-story details to further enrich the visitor experience.

“It’s difficult to put into total context today what pressure and danger the Allied crews faced during the war, but this nose art was deemed by commanders as an important part of the morale for these units,” said Keegan Chetwynd, CAF museum curator. “When we began the plan for our new National Airbase in Dallas, we didn’t want these artifacts simply stored away in a warehouse, because it’s important that their stories be told. EAA and its museum was the first place that we believed would display this art with the respect and context that it truly deserves.”

EAA plans several events throughout the coming year that will feature the nose art collection and tell more of the background behind each piece.

About the CAF National Airbase

The CAF National Airbase project under development will be located at Dallas Executive Airport, located approximately five miles south of downtown Dallas. The Airbase will be an aviation attraction like no other, where visitors will be immersed in the experience of flight while honoring America’s military aviation history.