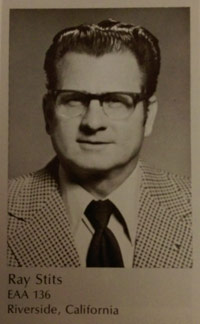 July 2015 - Ray Stits, EAA member No. 136, passed away on June 8. Yes, he was the 136th person to join the EAA, and his membership number would have been a lot lower if Paul Poberezny’s letter to Ray inviting him to join had not sat in the airport office for six weeks before someone finally delivered it to Ray.

Ray was the founder of our EAA chapter network, working with Paul and the board to amend EAA’s bylaws to allow EAA chapters and immediately starting Chapter 1 at Flabob Airport in Riverside, California.

Paul Poberezny on Ray: “One time when I was talking with Ray about the future of the EAA, he told me it will grow into the largest and most active group of aviation enthusiasts, builders, and fliers in the United States within five years. How right he was—and how much he has helped us get there. Ray Stits has been one of our greatest supporters through the years.”