February 2017 - ForeFlight, an amazing piece of software available for the iPod and iPhone, is used more and more in professional aviation but also extensively in the GA world. We mentioned in the October 2016 issue of Bits and Pieces that in the United States it was possible to click on an airspace area and get detailed information without having to scan around to find the information embedded in the map, whereas that information was not present in the Canadian maps.

ForeFlight recently informed me that this capability is now available with the Canadian version, and they sent me this nice screenshot of it. To access it, simply enter maps mode if you are not already there, press and hold in the airspace you are interested in, and select “all” if you don’t already see it. The first items in the list you see will be the controlled airspaces in the area that you selected. You will see the designation, the relevant altitudes, and the type of airspace. 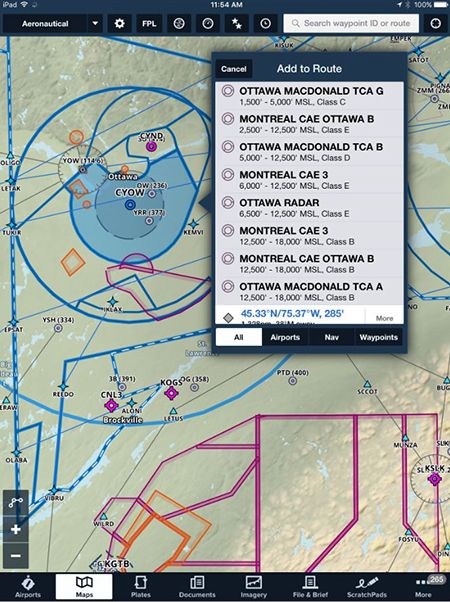 It’s good to see the convenience and ease of use of this type of software continuing to grow in superiority over old-fashioned, overloaded flight bags full of sometimes out-of-date charts. If any of our readers would like to write an article about other options for useful software in the cockpit, we’d love to hear from you.

In discussing this with the ForeFlight support team, I’d asked about what I’d believed was intended to be the U.S./Canada border line (a white dashed line over blue) with no identification of what it was, at least on the VFR navigational  chart. Maybe I was in a minority in not understanding this line, but apparently it is the boundary between the Boston Flight Information Region and those of Toronto and Montreal. It makes an odd jog around the city of Cornwall, Ontario, and then deviates slightly north of the St. Lawrence River, making an odd box just north of Ogdensburg, New York. It’s clearly identified on the low IFR charts with frequent labels close to the line. 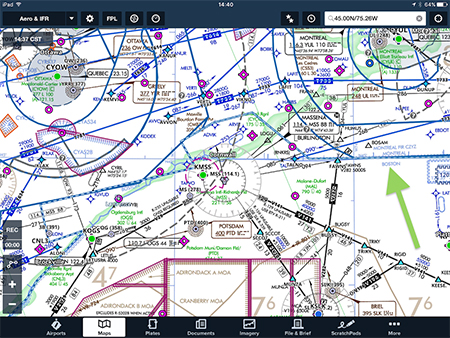 Without having checked along the whole Canadian/U.S. border (well, I did briefly check as far as Thunder Bay), this area of deviation from the border seems quite unique. It seems that Cornwall would fall under the Boston Flight Information Region.