February 2017 - EAA President’s Award winner, Ted Slack passed away peacefully at Forest Hill Long Term Care Centre at the age of 85 on Tuesday, January 10, 2017. Ted had been suffering from dementia during the last years of his life and recently suffered a stroke from which he did not recover.

Ted’s self-effacing, reticent personality kept him out of the spotlight, but his work and accomplishments are large and, although difficult to pull together, need to be told. 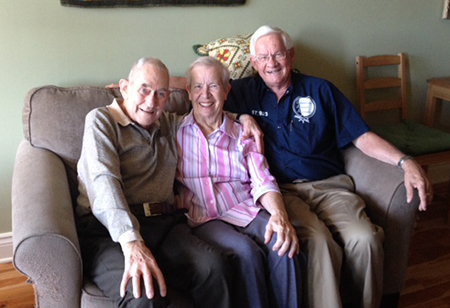 Ted graduated from the Southern Alberta Institute of Technology with an aeronautical engineering diploma in the spring of 1964. Even then he was earnestly interested in light aircraft and was an early supporter and member of the Ultralight Aircraft Association of Canada, which later morphed into the amateur-built aircraft classification.

The EAAC Technical Committee owed its existence, in part, to the first aerobatic contest held in Canada at Peterborough in 1968. This event brought attention to the fact that homebuilt aircraft, including the legendary Pitts Special, were not approved for aerobatics in Canada. At this event several competitors were not allowed to participate.

Consequently, the first activity of this EAAC Technical Committee was to perform stress analysis on the Pitts Special and, as a result of this report being submitted to Transport Canada, the aircraft received an “aerobatic waiver.” This was followed quickly by similar activity on behalf of the Steen Skybolt, Zenair Zenith (with aerobatic spar), Wag-Aero Acro Trainer, Jenkinson FJ Special, Zenair Acro Zenith and Super Acro Zenith, Sorell Hiperbipe, Ultimate Pitts, and the Christen Eagle. This effort represented monumental work involving a detailed check of drawings and structural details as well as performing a complete stress analysis, or a check, on the designer’s stress analysis if available. It also required a thorough flight test program.

A few years after the formation of this technical committee, Burt Rutan’s Vari-Eze came on the scene and captured the attention and affections of many would-be builders. However, this design was not approved in Canada because of the new “composite construction” methods and “higher-than-allowed” wing loading. Ted and company set up a conference/workshop seminar at Centennial College in Toronto (December 3-10, 1977) with Burt Rutan, Larry Haig (who’s American Eaglet had a composite spar), and senior Transport Canada officials Ken Owen (chief of airworthiness) and John Mew (chief of inspections). At the end of that week, the Transport Canada officials expressed their support. The approval of these designs and other similar designs followed shortly thereafter. This paved the way for the construction of composite light aircraft in Canada.

When the ultralight aircraft (initially called the microlight) came on scene, Transport Canada was faced with the dilemma of either having to come up with regulations or tolerate unlicensed, unregulated use of airspace. Reluctantly they chose to regulate the activity and called on Ted for advice. Ted became involved as the consultant to help Transport Canada stickhandle through the issues and help in the formulation of ultralight aircraft regulations in Canada.

Such was the esteem that Transport Canada held for Ted and the Technical Committee that they accepted all of the committee’s presentations, including:

In 1981, Ted received EAA’s highest achievement, the President’s Award, presented to him by Tom Poberezny.

In 1983, Ted and company formed the Canadian Aerosport Technical Committee, which continued these works in a totally autonomous environment; not affiliated with any single organization. From 1983 through 1995 this committee (CASTC) issued a number of highly respected reports for Transport Canada and the industry.

On June, 23, 1985, Air India Flight 182 (Boeing 747-237B) crashed into the Atlantic Ocean 110 miles west of Cork, Ireland. What followed was an exhaustive investigation into the cause of the crash by the government of India assisted by the Canadian Aviation Safety Board. This investigation, headed by John Garstang, concluded that the crash could only have been caused by the explosion of a bomb placed in the aft cargo area of the aircraft. The analysis of the resultant report for the Royal Canadian Mounted Police (RCMP) included the work done by Ted, whose efforts included follow-on wreckage target identification and fracture pattern plotting. Ted commuted between Ottawa and Vancouver weekly for the duration of his involvement in this investigation.

Until health failed Ted in 2012, he would spend every summer at EAA AirVenture Oshkosh, preparing the hundreds of components used in the sheet metal workshops. Ted would arrive about a week early and, in his quiet manner, go to work.

You will be missed Ted. God’s speed.