Builder of Bits and Pieces

February 2016 - Gus Chisholm of Goderich, Ontario, died January 27, 2016. He was 90 years old and had been a pilot most of his adult life, holding a private pilot certificate for 62 years. He called his Canadian homebuilt Corben Baby Ace Bits and Pieces, and it was out of homage to the aircraft that the title of our newsletter was chosen. 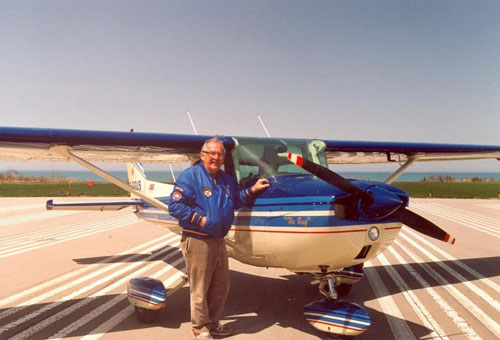 Gus always loved aviation above all else. His pilot instructor at Sky Harbour was another legendary homebuilder and pilot, Keith “Hoppy” Hopkinson, and Gus was his first student pilot in peacetime. Gus was director of sales for Sky Harbour Aircraft Refinishing and also had careers as a car salesman, general manager of Dearborn Steel Tubing – a local manufacturing outfit – as well as working in real estate sales and as musician in a group named “The Young and the Rest of Us,” which entertained many in local nursing homes and hospitals. Gus flew Bits and Pieces to the EAA fly-in at Rockford, Illinois, in 1959 along with his best friend Keith Hopkinson in his Stits Playboy CF-RAD Little Hokey.

Gus was well-known to local aviators in the Goderich area and at the nearby Centralia Airport, where we believe the photo above was taken.

The Baby Ace Bits and Pieces is still flying and was once flown by then-chief of the Canadian Snowbirds. It is currently registered under the identification mark C-FRAC to Tom Dietrich, one of the Tiger Boys, at Guelph Airpark, Ontario. RAC are Gus Chisholm’s initials—Robert Angus Chisholm. The aircraft has been flying since its first flight in 1958.

The internment will be private, but donations are welcomed in his name at this link to the Heart and Stroke Foundation.

Readers who knew Gus are encouraged to send us their stories about him.