If you’ve followed our previous articles about Sam Aircraft you will be interested to note that the company was recently acquired by Zenith Aircraft Company and Zenair (based in Midland, Ontario). The new owners are interested in feedback and have requested customers complete a survey. I just completed the survey and the questions are pretty much as you’d expect—what features do you like/need, engine choices and the like, and questions on whether you are likely to buy one and what type of configuration. Zenith Aircraft and SAM Aircraft provided the following press release. Editor

Founded in 2009 by Thierry Zibi in Quebec, Canada, SAM Aircraft was developed as a modern light-sport aircraft (LSA). A low-wing, all-metal tandem two-seater, the SAM Aircraft design is unique in that it presents a rare balance between retro styling and modern engineering. The SAM Aircraft was inspired by legendary trainers of the Golden Age of Aviation, yet it offers pilot comfort, state-of-the-art technology, and outstanding flight characteristics that all sport pilots will appreciate. 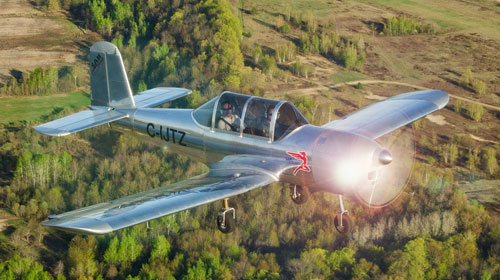 Several variants of the design are being developed for different load configurations and performance characteristics. These feature different wing sections (differing spans), as well as landing gear styles (tricycle or tail wheel) and canopy choices (fully enclosed or open cockpit). The Heintz brothers have been researching market viability for the different design configurations, including:

Zenair engineers are currently performing a thorough review of the SAM Aircraft design. Says Matt Heintz of Zenair: “The advanced engineering used in developing the SAM is impressive, including extensive use of 3D modeling. With us bringing this aircraft to market, the new SAM Aircraft design will benefit from our 40 years of experience manufacturing aircraft kits.”

“The SAM Aircraft design is a distinctive and fun airplane and will be a welcome addition to the Zenith line of kit aircraft,” stated Sebastien Heintz, president of Zenith Aircraft Company in Missouri.

To help the companies focus on the most popular features for the new SAM Aircraft models, Zenith Aircraft has created a short survey and is inviting all interested parties to complete the online form.

Like existing Zenith Aircraft designs, such as the high-wing CH 750 and low-wing CH 650 series, the SAM Aircraft models are constructed primarily of 6061-T6 aluminum assembled with blind rivets, making them easy and quick to build as well as durable and affordable. The design, construction, and assembly of the SAM Aircraft series will integrate well into Zenith Aircraft’s current production, which already relies heavily on computer numerically controlled (CNC) parts production. Based on survey results, SAM Aircraft may be offered as complete kits, quick-build kits, and/or as fully factory-assembled aircraft.

About Zenith Aircraft Company:
Zenith Aircraft Company is a market leader in sport kit aircraft manufacturing. Zenith produces and supports easy-to-build kits for the popular two-seat Chris Heintz designs, including the high-wing CH 750 series (STOL and Cruzer models), the original STOL CH 701, and the low-wing Zenith CH 650 aircraft. These aircraft have earned an excellent reputation for their flying characteristics and for being both quick and easy to build, well-suited for first-time amateur kit builders. Zenith aircraft may be scratch-built (from blueprints only), or built from component or complete kits (as well as from quick-build kits). To demonstrate how quick its kits are to build, Zenith Aircraft and the EAA sponsored the One Week Wonder project, where a complete Zenith CH 750 Cruzer was built in just one week during EAA AirVenture Oshkosh 2014 (with the participation of more than 2,500 volunteers). Zenith hosts monthly workshops at its factory (centrally located in Missouri) to give potential builders the opportunity to experience first-hand and learn about building and flying their own Zenith kit plane.

A major announcement about the SAM Aircraft design and production will be forthcoming, once the current engineering review and market research have been completed.