March 2016 - EAA is home for those who build and restore aircraft, and at EAA Chapter 245 it’s the members who are joining in and getting their hands dirty to assemble a Zenith CH 750 Cruzer kit project. What a great opportunity! As you may know, Chapter 245 made an application and was successful in having one of five sets of wings donated from EAA’s Give Flight program.

The set of Zenith CH 750 Cruzer wings were fabricated at AirVenture 2015. EAA members from Carp, Ontario, were in attendance at Oshkosh 2014 when the One Week Wonder was advanced from a box of parts to a fully functional aircraft within one week. I remember pulling a rivet myself and seeing our own Bill Reed assisting in the project. Here is a link to the One Week Wonder, including a wonderful time-lapse video of the whole week.

The executive of EAA Chapter 245 at Carp, which is near Ottawa, is to be commended on making the bold decision to undertake a Zenith Cruzer Project. EAA members who are not able to undertake a project of their own can now experience, firsthand, all aspects of building a kit plane. Like a good vacation, much more will be experienced during the journey than at the destination.

We had quite an adventure of picking up the remainder of the kit from the Zenith factory in Midland, Ontario, and bringing it back to Carp. Now, what to do?

In order to obtain baseline information, EAA 245 coordinated a Zenith education session. Matthew Heintz of Zenith supported the initiative by providing the session free of charge. On January 9 and 10, Matthew provided an overview of the aircraft and what to do and what not to do for the 20 or so members in attendance at the Carp FBO.

After the Saturday morning education session, the attendees reconvened at the EAA 245 clubhouse to assemble a test project consisting of a 150-mm square of aluminum sheet, four angles, a few rivets of different sizes, and an AN3 bolt. The buzz of drills and clicking of snips provided background noise for the many debates that were taking place. It is truly amazing to see so many variations of an assembly created using one single drawing. The point was driven home that the interpretation of the drawings would be one of the biggest challenges to building a successful project. Now it was time to gather some real airplane parts and begin the project. 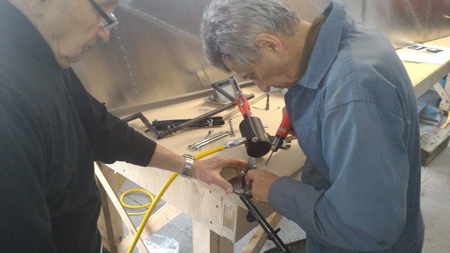 An ad hoc team structure was created with Chapter President Phil Johnson serving as the build master. Team leads were assigned to work with a team of four to five people on the various components. The teams assembled their parts and convened at a work space of their choice to put into practice the basic skills they learned during the morning session. Matthew shadowed the builders, providing a bit of supervision, perspective, and guidance. Any questions as to interpretation were discussed in the group, and if there was no resolution, a decision was sought from the build master. 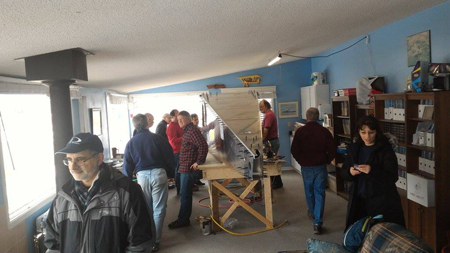 The teams collected parts and at the end of the day there were bits of a firewall, front fuselage section, and some completed assemblies of rear fuselage and firewall laying on tables. 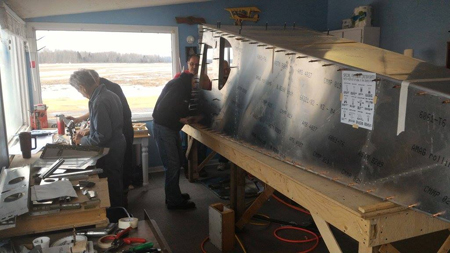 By the end of the weekend, attending members gained experience in drawing interpretation, cutting, fitting, drilling, deburring, chromating, and riveting and were almost experts—NOT! They found that there was much more to be learned, like how to remove a rivet. 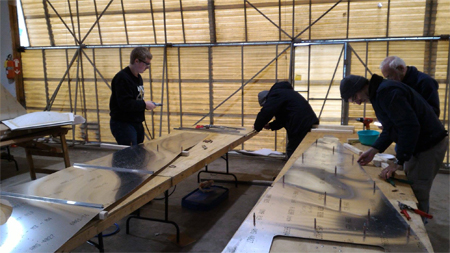 Sundays were chosen as the primary build day starting at 10 a.m. I can personally attest that by 10 a.m., the fire has been lit, heaters turned on, the compressor timer reset, and builders are ready to get into the project of the day. The building usually continues until sometime in the afternoon. There has been a wide variety of attendees including young, old (No surprise there, Ed), experienced, male, and female, and are all very ambitious and motivated.

By the end of the day on February 7, the front fuselage had been taken apart and ready for chromate, and the rear fuselage was being preassembled, with bits of the front fuselage being appended. In the next few weeks the project should begin to look more like an airplane. 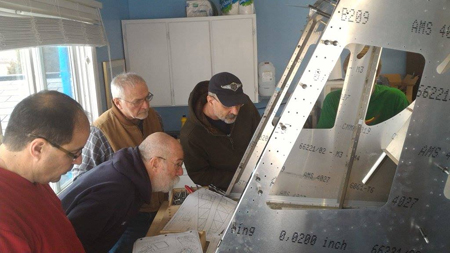 Any member interested in the project can come out to the EAA hangar and take part or hang out. The project will have many more stages during the evolution, including sheet metal, wiring, rigging, mechanical work, and even upholstery. It is never too late to come out and take part in this exciting project. If building is not your thing, there are many other needs for support, including parts inventory, design, parts sourcing, fund raising, and article writing!

The drawings and instructions, as well as the builder log, have been placed on our Dropbox file server so members can take a peek at the assembly they may be working on the following Sunday and gain some experience on how the project will go together.

Various members have been dropping by to see the progress and chat with the group and share stories. 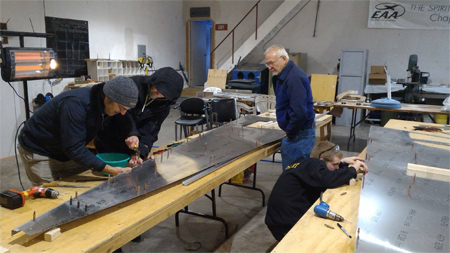 Working on the fuselage skins

There have also been a few drops of blood shed when a No. 30 hole was drilled into a fingernail (really sorry, Steve), and there are strong bonds forming between members and the airplane as well as between chapter members.

It is evident that there has been a lot of preparation in building tables and assembling tools for the project. Kudos to those of you who have been working so hard behind the scenes.

It is also obvious that this project has pulled like-minded people together to pursue a passion. Rich from Massena, New York, has border patrol to contend with when he comes to Carp and has likely driven the furthest to participate. He puts it something like this, “It has a high satisfaction to mile ratio.”

See you at the hangar on Sunday!