March 2017 - You may remember my previous articles about my homemade Hoerner wingtip tanks and the reason for installing fuel quantity senders and gauges. These photos show the gauge with +12V and ground applied and the sender unit installed. A small magnet was used to raise the float rod enough to see that the fuel quantity indicator does work. 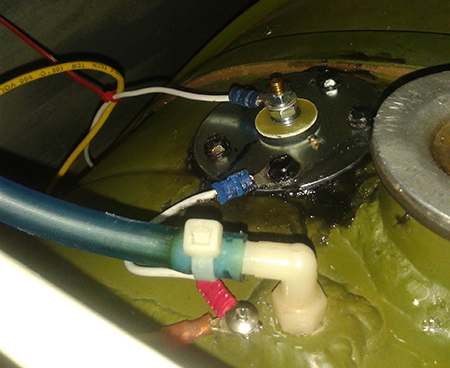 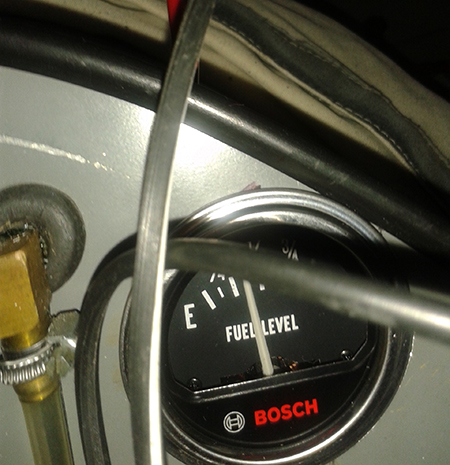 The gauge picture shows the gauge at half full. That’s not calibrated. We did follow the float rod calibration chart but the measurement they give for an 8-inch deep tank does not result in full indication even when the float is lifted to the top of the tank. It results in about half full. Not good enough. We’ll need to remove the sender and redo it.

There are two ways to do that. The float rod could simply be cut shorter or, alternatively, the variable capacitor could be moved lower on the sender bracket. We prefer trimming the float rod because that reduces weight, but both are easy to do.

We think this mod is worthwhile as the tank sight-glass has proven impossible to see in flight as it’s right behind the pilot’s head. The sender and gauge are Bosch and cost less than $50 all in. The wiring materials and tools were in hand.

To reiterate from our previous article, this auxiliary tank is used for cruise, and the tip-tanks (7 gallons) are used to transfer fuel to the auxiliary tank as fuel is burned. One would select main tank before the fuel transfer begins. Should air get into the auxiliary tank line, both the gascolator and carb float cavity have some ability to deal with air or vapour. Even so, it would be smart to watch the fuel transfer and stop the pump at, say, 7/8 full or if the gauge needle stops moving.
To provide a better user experience, EAA uses cookies. To review EAA's data privacy policy or adjust your privacy settings please visit: Data and Privacy Policy.