The Right Place at the Right Time

April 2018 - I was at the airport recently with my wife looking over some issues that concerned our hangar when I spotted George Kirbyson. He is one of the six local pilots who own our condominium hangar at the Langley, British Columbia, airport. By the way, our hangar contains an interesting variety of aircraft: a ’41 Porterfield, a Fairchild 24R, a Piper Family Cruiser, a Piper Pacer, my Stinson 108, and George’s Pitts S-2.

George’s Pitts is painted black and gold in the striking colours of the Ray-Ban Gold Aerobatic Team, which George was part of in the ’80s and ’90s. That team included the founder, Bill Cowan (left wing), Rod Ellis (lead), George Kirbyson (right wing), and Al Hauff (slot). 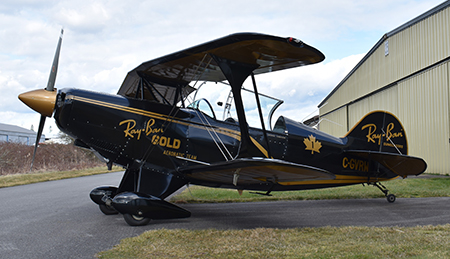 At multiple Abbotsford International Airshows over the years, I had watched this team put on incredible displays of formation aerobatics little knowing that I would one day share a hangar with a member of the team. Fast-forward back to this sunny winter day when George offered me a ride and, of course, I immediately said yes.

After a brief stop at the fuel pumps, George gave the most comprehensive preflight briefing that I have ever had. It included how to put on the parachute, how to get into the airplane, how to attach the five-point harness and the secondary seat belt, and, in the worst-case scenario, how to jettison the canopy, how to get out of the airplane, and also how to use the parachute. The canopy comes completely off to allow certain no longer flexible geriatrics to get into the aircraft in the first place.

He then briefed the flight, which included turns around the nearby Golden Ears mountain peaks, an opportunity for me to fly — more or less right side up — followed by more serious things such as loops and rolls.

We turned onto the active runway, and the acceleration provided by the 260-hp engine was incredible as was the climb-out at 80 knots and 4,000 fpm! 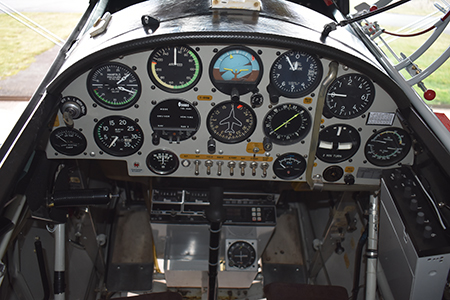 The view from the back – absent of Sic–Sacs.

After a tour of the local mountaintops and some valley lakes, we headed for the practise area. After some straight and level flight and some (by my standards) steep turns, I felt more comfortable with a stick instead of the wheel I was used to. However, things do change. My first attempt at an aileron roll required George’s help as I sort of fell out of it into what he thought might have been a split-S. I then paid more attention to his instructions and actually felt quite proud of my second and third tries.

By now we had been at this for a while, and the effects of the more than 3.5g were starting to be apparent.

He then demonstrated a loop, and when I seemed a bit hesitant, he demoed it again. While I declined his offer to try one, I did consent to riding along on a hammerhead. I then cried uncle as the need for the Sic-Sac was getting more apparent.

At that point, George kindly headed back to the airport to land. However, being who he is, the landing had to include a low approach and a hard left break to join the pattern. After thanking him for what had been an awesome opportunity and experience, we put the airplane back in the hangar and I headed for home.

As I said, the effects of g-loading are accumulative, and there were moments during the drive home that I didn’t think I would make it! But I’d do it again in a heartbeat.