May 2018 - Opening day at the SUN ’n FUN International Fly-In & Expo in Lakeland, Florida, saw no sun and was no fun. Very little activity could be seen around the exhibit area or on the runways, but that was all about to change with the arrival of Wednesday. The cold front had brought some refreshing temperatures, and walking the grounds was delightful. If you’ve never been to SUN ’n FUN before, it’s a great way to start the flying season, especially if you’ve been snowbound for six months. We camped in the overflow camping which is a lot more open, providing a better view of the air shows without ever having to deal with the crowds. 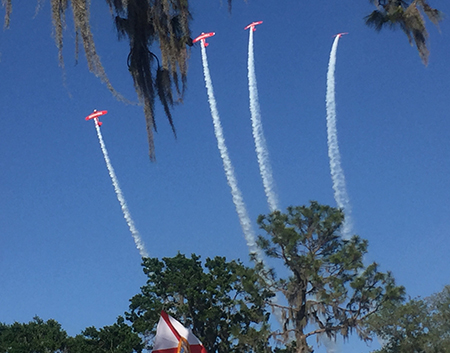 View of the AeroShell Aerobatic Team from the campground.

Your EAA Canadian Council has been hard at work for several years to create a Canadian corporation that will apply for charitable status. Why is this important to you? Well, one of the strengths of our chapters across our southern border is that they are able to offer tax deductions for donations, which can significantly stimulate chapter development. We’re working to offer the same capability, and chapters across Canada would do well to consider how donations from members could be leveraged to strengthen them. One of my favourite visits last year was to an EAA Chapter Leadership course in Brockport, New York. The chapter’s impressive facility would not have been possible without tax-deductible donations from members, beginning with one significant donation allowing the purchase of an on-airport piece of land and enough money to pour the concrete foundation. Future years saw the members collaborating on building walls and the roof and outfitting the inside to be the beautiful facility it is today.

2018 might be a good year for chapters to begin thinking about projects that would involve donations of anything from aircraft or tools to estate planning or cold hard cash. If we achieve our goal of Canadian charitable status, it would be a great shot in the arm for our organization.

One of our luminary Canadian aviators, Jill Oakes, EAA 626188, of Winnipeg, Manitoba, and her partner have set off on an adventurous mission to raise funds and awareness for Parkinson’s disease. Her husband, retired senior biologist Rick Riewe, suffers from the disease, and he will be leading the Ride With Rick for Parkinson’s using a specially designed semi-recumbent bike. 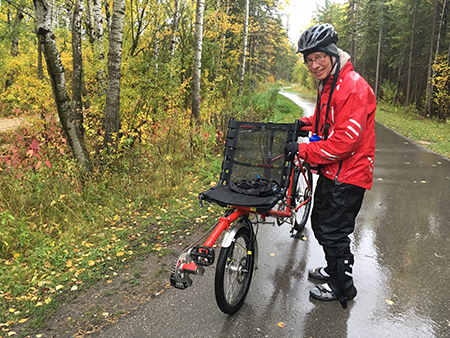 The Manitoba Ninety-Nines have agreed to sponsor the ride, which will cover 12 U.S. states before returning to Winnipeg. It is expected that Rick, Jill, a caregiver, and several supporters will cover more than 6,000 kilometers between May 1 and August 31. 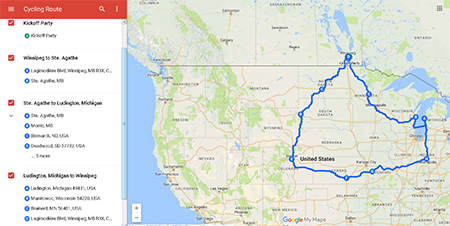 If you are familiar with SPOT and would like to follow Rick and his team, you can do so at this FindMeSpot link. This article in The Globe and Mail recounts the quest to find a cyclist/caregiver/camper willing to spend the four months assisting Jill in caring for Rick’s medical needs. More information about the Ride With Rick for Parkinson’s can be found on their Facebook page.

Thank you to all of our contributors this month. Without you this would be a pretty boring newsletter. Please keep the articles coming in, however brief.