Flying Adventure: From Florida to Canada in an RV-9A

You may remember reading about our flight from Quebec, to Venice, Florida, which was published in the November 2014 issue. It was quite an adventure. The flight back was a lot easier. We left at noon on Friday from KVNC (Venice) and landed in CZBM (Bromont) at 7 p.m. on Saturday. Of course, no flight this long can go without some stories to tell.

My friend Gaetan Gagnon was amazingly generous with his time, having agreed at the last minute to grab a commercial flight from Montreal to Tampa on Thursday to accompany me on the flight back home. I picked him up in time for him to enjoy the afternoon at Sun ’n Fun International Fly-In & Expo. He even found time to buy a hat to prove he’d been there! Then he wandered off to watch the air show which featured the Blue Angels and much more.

Arriving at Venice Airport on the morning of Friday, April 24, we loaded luggage, handed in the season’s security pass for the airport, and started the engine at noon. Headed north, we requested flight following and were advised to stay to the west of Lakeland Linder because the Sun ’n Fun traffic was staging to the east. There was a lot of humid air and some low clouds, so we contacted Tampa approach and were given vectors to avoid its traffic and head north. Cloud bases eventually opened up to around 10,000 feet rather than the 2,000 feet we had witnessed at the beginning of the flight.

We flew for 3 hours, 45 minutes, arriving in Allendale, South Carolina (KAQX), for a fuel stop and a stretch of the gluteus maximus, then headed north again. Our next leg was to Farmville, Virginia (KFVX), avoiding the Shenandoah Valley ridges and their turbulence to our west. We arrived just after 8 p.m. and tied the aircraft down for the night.

It was at this point that we started calling for hotels and taxis, only to discover the one and only taxi in town was out on a 2-hour fare. (Remember this is small-town America on a Friday night.) The yellow pages showed five taxi companies. One said irritatingly, “This is not a taxi service.” Another said, “We’ll call back,” but never did. One didn’t answer and one line was disconnected. Fortunately this little airport has an old terminal building which is used, among other things, as a place with vending machines for drinks and pop. At one point, Gaetan felt so desperate for a taxi that he had the zany idea to hold a sign up to the security camera saying, “We would like a taxi,” but that didn’t work. 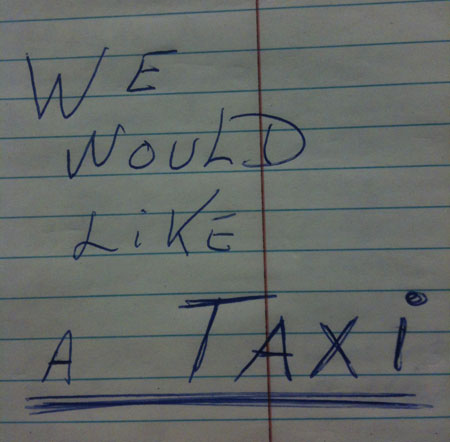 Our next idea was to call the local police for advice, but in the end we realized we could just pull some sofas together and sleep in what we designated as the “pilot’s lounge” for the night. We were a lot more comfortable when, in the middle of the night, I discovered where the thermostat was cunningly hidden – on the way to the bathroom. 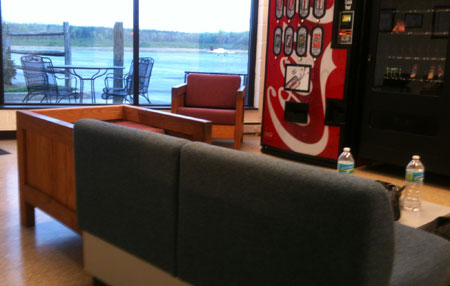 A picture tells the story – RV at the tiedown.

Farmville also has an EAA chapter. If you remember this airport, it might be because that’s where I stopped on the way down in October to have my spark plug problem fixed. Unfortunately on this rainy Saturday morning we saw no local pilots. We did, however, see an interesting night exercise involving two military helicopters hovering over the runway after dark. The airport is right next to a military operations area (MOA) also called Farmville. We didn’t see much other than flashing red lights and the helicopter profiles as they climbed out. 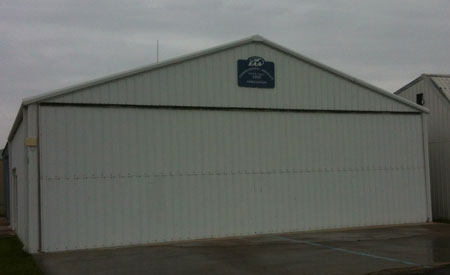 We survived the night, and after chatting with a lady pilot arriving solo from Sun ’n Fun in a yellow Super Cub on floats, and a flight instructor there to carry out a checkride, we took his advice and selected Williamsport, Pennsylvania (KIPT), as our next destination. That flight would take us to the east of the highest of the Blue Ridge Mountains and west of Washington, D.C. (ADIZ).

We filed our Electronic Advanced Passenger Information System (eAPIS) notification to indicate we were leaving the United States, and we received an automated confirmation within about 15 minutes. Because of lower ceilings, we began this leg at 5,500 feet but had to descend when the windshield became obscured with light icing. It quickly dissipated at 3,500, much to our relief. Closer to Williamsport, we began to cross mountain ridges perpendicular to our course so, clear of the icing threat, we climbed again and started looking for the airport. Now Williamsport lies in a valley and it was completely invisible to us until we were almost on it. We approached over the mountain ridge high enough to avoid turbulence and were relieved when we encountered very little rough air.

We contacted the tower at KIPT and they gave us clearance to land. So we made a steep descent to the downwind, crossing the airport, and set up for a long final. We asked for taxi instructions for the restaurant and fuel and were told they are at opposite ends of the airport. (Of course!)

We picked the restaurant first, where we enjoyed the first hot meal and coffee since the previous morning. It was now shortly after 1 p.m. on Saturday. The club sandwich and soup we both ordered were delicious and service was fast. It was here that we phoned in our flight plan for the next leg, which is mandatory when crossing the border. After fuelling up, we were on our way to destination Ottawa (CYOW) to clear customs. Sitting inside an RV-9A and looking up at commercial airliners taxiing by is an unusual feeling for this pilot, but it was the only airport on our route with customs available on the weekend.

The routing direct from Williamsport to Ottawa provided better and better weather and sometimes clear blue skies. It was a bit of a shock to the system, having been in shorts and hot, humid weather the day before. Opening the canopy in Ottawa made one realize how chilly it was, even in the sun.

This was the first time I’d ever been on final and had to fly off in a big circle to allow an airliner to land. The ATC folks were great, though, and didn’t seem at all put out to be dealing with my little RV among their commercial traffic. I have no idea if I’ll receive a landing charge or not, but it was worth it for the experience. 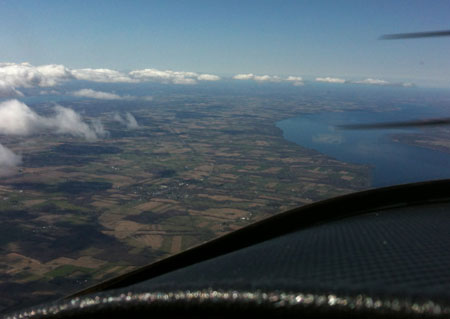 We cleared customs by phone after being on hold for what seemed like an eternity. No one came out. They just gave us a report number and told us we could go on our way. After contacting ground, we were given taxi instructions and soon we were on the last leg to Bromont, Quebec. We landed to worsening weather at exactly 7 p.m. It was then that I realized that my tie-down ropes for my parking spot were at home, so that same evening I returned to put the plane securely to bed for a few days.

I have to say that flight following is the greatest. You don’t need to have filed a flight plan in the United States, but as soon as you announce your destination, you’ll receive a code to squawk and keep you advised of any conflicting traffic or zones to avoid. I just love it. If you don’t have a transponder, you might like to consider getting one. Listening to ATC saying, “There is an aircraft near you, but I have no idea of his altitude or identification,” makes you realize the benefits of a Mode C transponder.

Other Lessons Learned From This Trip

The seats I made are not bad for short journeys, but they seem to get really uncomfortable on longer trips. I think I could fly for longer with a change of seats. Discomfort = Distraction.

Canpass saves time. I checked into it a few weeks earlier, and it would have taken four weeks for the pass and maybe another couple in the mail forwarding. My local airport is an airport of entry, but without weekend service of any kind, I could not land there directly from Williamsport without Canpass. A combination of being able to fly direct to Bromont and the time saved clearing customs would have shortened our day by maybe an hour and a half. (See our separate article on Canpass.)

A Canpass costs $40 and it is good for five years. You just need to download Form E672 and fill it in. It takes 4-6 weeks, so don’t wait too long if you plan to fly to the United States soon. By the way, if you do this, everyone in your aircraft also will need a Canpass number to be able to make use of it after hours. 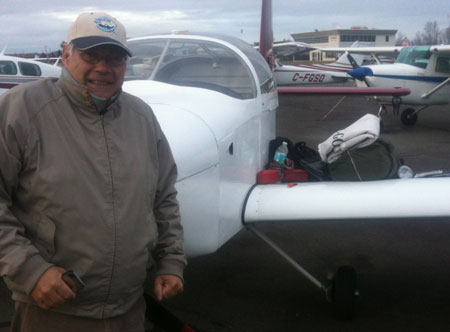 Total flight time was 12.6 hours including the hour from Ottawa to Bromont, and total fuel costs with fuel averaging about $4.40 U.S. a gallon was about $440 U.S., averaging about 7.8 gph.